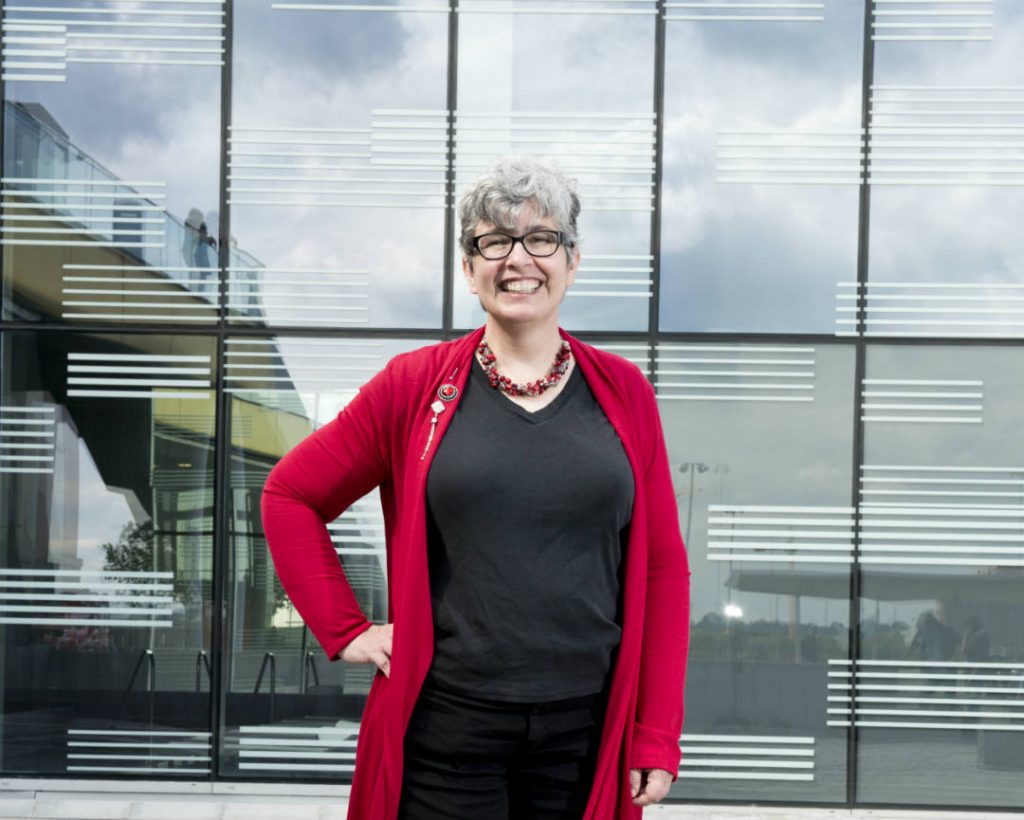 Ann Leckie is the author of the Imperial Radch trilogy, that begins with Ancillary Justice, winner of the Hugo, Nebula and Arthur C. Clarke Award. Sequels Ancillary Sword and Ancillary Mercy are also award nominees. Leckie’s short stories have appeared in Subterranean Magazine, Strange Horizons, and Realms of Fantasy, and “Hesperia and Glory” was reprinted in Science Fiction: The Best of the Year, 2007 Edition edited by Rich Horton.

CARL SLAUGHTER:  What’s the overall theme of the Ancillary series?

ANN LECKIE:  That’s…I’m not sure? I know a lot of great writers–some of them friends of mine!–who work knowing their theme. Sometimes I’ll work with a myth for a template. Or, not really a template but a…structural element? That doesn’t really express it, either. So, when I’m writing, often I’ll need to make lots of very tiny decisions–what are people eating? What color is the floor?–as well as the larger ones (how is a particular relationship going to play out?). Those can be paralyzing, because the answers often could be nearly anything at all without throwing the story off-course. So you’d think it would be easy to just throw in a random detail (or a generic personal interaction that advances the plot in a utilitarian way) and go forward. But I actually find that really difficult. If I have a structural thing to guide those choices, when I’m faced with them I just go back to that, whatever that is, and think of something that will resonate with that or connect to it somehow. By and large the result feels unified in an under-the-surface way that I really like, that would be much more difficult if I was working without such a structural element.

Anyway. The books do seem very much concerned with what makes a person a person, or who anybody is anyway, so I suppose that’s a pretty major theme.

If you’re super curious about the structural element for the Ancillary books–I didn’t use it much (or really at all) for Mercy because by then I was just playing out the consequences of Justice and Sword and didn’t need it, but for the first two I spent some time with Isis, Horus, and Osiris. Obviously the books aren’t any sort of retelling or adaptation, and it’s not a connection you’d find on the surface at all. But I found the idea of mourning Isis searching for and reassembling the dismembered Osiris, and the contested rulership of the kingdom divided in two (and the ultimately merging identities of Horus and the Osiris he is essentially destined to become) really resonant with the story I was writing, so it felt like a good source for that kind of structural assistance.

CS:  Do the individual novels have their own main themes?

AL:  Probably? They’re certainly very different books. I told a friend of mine that by the time I was done with Ancillary Mercy I was thinking of the trilogy as a three movement sonata, with Sword being the middle, quieter, slow movement. Each of them does have its own themes, I suspect because, as I said, they’re very different books. But I’d be hard pressed to articulate what they are, beyond pointing to the books themselves. Sometimes I feel like if there was a shorter way to say it than writing a novel, I’d have done that, because dang, that was a lot of work.

CS:  What are the secondary themes?

CS:  How do these themes play out in the character development?

AL:  The question of who anyone is anyway plays out pretty blatantly in Breq’s entire arc, I imagine. And Tisarwat’s. And Anaander’s, though I don’t think she gets much of an arc, really, the story’s not about her the way it’s about Breq.

Seivarden is maybe a contrast to Breq — it’s not that her arc is questioning or exploring or developing the concept of her own personhood, it’s that much of her arc is a question of recognizing that anyone else is a person worth considering.

By and large, btw, I noticed partway through drafting Justice that there are a lot of matched and/or contrasting pairs of characters. I’m not sure it counts as a theme playing out, but I think it was probably a structure I used to play them out, whatever they were.

In case you haven’t noticed, I personally find that a lot of the process of writing takes place unconsciously. Not all of it, of course, there’s a lot of conscious work you have to do, and I think any writer is well-advised not to just spit out whatever they dredge up from the back of their mind without any kind of examination or shaping. But I think, just personally, that writing a story is, in a way, running code on someone else’s mind. I’m trying to hack the reader’s mind in such a way that they have a particular experience while reading. This is a really incredibly complicated task, when you put it like that, but it’s what even the simplest all-action popcorn adventure story is trying to do. That’s far too complicated to do entirely consciously, IMO. I think most writers find a way to hack their own minds–to trick themselves into doing what’s needed.

Like, did you ever take voice lessons? I did, in college. And my teacher would do this thing, she’d say something like, “Now, this time, imagine your voice spinning out from your forehead.” And I would, and it would work! But of course you can’t really make your voice spin out from your forehead. It’s just that somehow imagining you were doing that actually did something real to your voice. And sometimes the advice wouldn’t work and she’d try something else. “Okay, then, try this….”

I think a lot of writers’ fascination with seemingly trivial details of process–particularly new writers–is because we’re looking for the hacks that are going to make our own voices do what we need them to do. Because like the voice lessons, not every hack is going to work for every writer. Just like not every reader’s mind is going to respond to the resulting writing.

AL:  So, while the neurology of ancillaries is something I spent a fair amount of time considering carefully (instead of writing paragraphs of probably badly expressed thoughts about the neurological basis of identity, I’ll advise anyone interested to look up split brain patients, alien hand syndrome, Suzanne Segal and her book Collision with the Infinite, Capgras syndrome, and Cotard’s syndrome). The very short version — it’s not completely farfetched to imagine that some fairly simple surgery could remove a person’s sense of identity — after all, strokes do it every now and then, right here and now. And while the tech to do the next thing — replace it with the conviction that they’re now the ship — is currently impossible, it’s not really difficult to imagine that happening at some point.

On the other hand, I must admit that the next step to making it work–constant, high-bandwidth communication between the ship and all its bodies including things like thoughts and sensations–is one hundred percent ordered from the pages of the deluxe Sufficiently Advanced Technologies catalog.  I got a discount–I’m a regular customer.

As to how the AIs control the bodies–how do you control yours? How do you control your left hand or your right hand? It seems like a bizarre question till you read about split brain patients and/or alien hand syndrome. Oh, and you know that reflex, where the doctor hits your knee and your leg kicks out? That impulse does not come from your brain. It’s all in your spinal cord. I found that information faintly disturbing when I first heard it.

As to how Breq could get or stay off the radar–she had an advantage, in that the ship was destroyed off the radar and so as far as everyone else was concerned she had disappeared and was presumed dead. And when she reappeared, her body was one that had been very recently hooked up, so no one alive would have recognized her, not even Skaaiat who almost certainly would have recognized some other segment of One Esk.

I’m not sure it would be so easy for a ship inside Radchaai space to take itself off the radar without managing to convince everyone it had blown itself up, honestly. 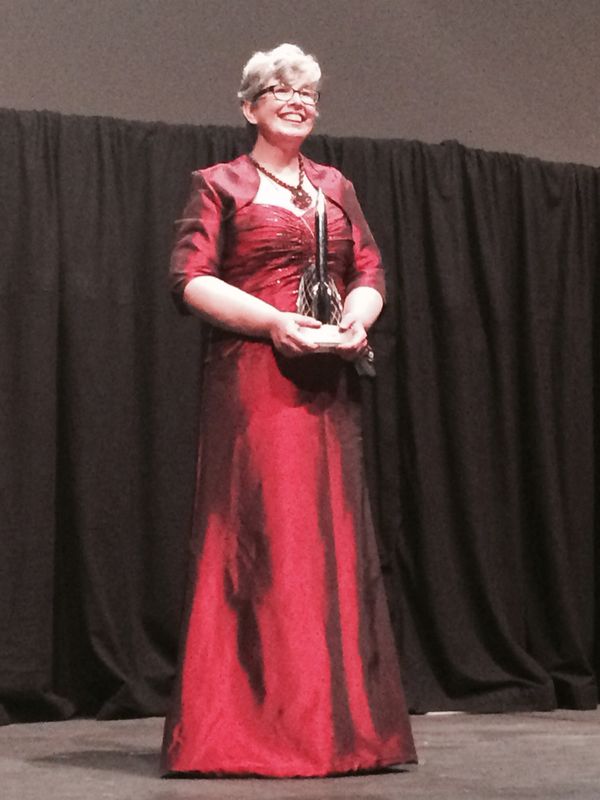 CS:  How many more stories will there be in the Ancillary universe?

AL:  I don’t know! Lots I hope. Just, they probably won’t be about Breq. I love Breq, I’d have to, spending a trilogy with her, but it’s time to do other things.

CS:  Are you going to return to short fiction, write more novels, or try to balance the two?

AL:  I’m working on novels right now, but I would love to make some time to do more short fiction.

CS:  Any plans to return to editing?  Magazines?  Anthologies?

AL:  Not currently. Every now and then I think it would be fun. It totally would! But editing is a lot of work, and it takes up the same kind of brainspace for me as writing does.

CS:  Any feelers from Hollywood about a screen adaption for the Ancillary story?

AL:  Currently Fox/Fabrik together have optioned Ancillary Justice for a TV show. Now, that may well mean that nothing will happen. Nine times out of ten, I gather, nothing does. But it’s cool to think something might come of it! That would be kind of super awesome.