K. Tempest Bradford thought it was so great that Sunli Govinnage spent a year reading only non-white authors, as reported in The Guardian, that Bradford told readers at XOJANE “I Challenge You To Stop Reading White, Straight, Cis Male Authors For One Year” and suggested 18 books from women, writers of color, or translated from another language, they can read instead.

After a year of that, the next challenge would be to seek out books about or with characters that represent a marginalized identity or experience by any author. In addition to the identities listed above, I suggest: non-Christian religions or faiths, working class or poor, and asexual (as a start).

My feeling is — if that’s what someone wants to do, have a ball.

I wouldn’t even make a comment except for this…

Something about Bradford’s article stuck in Larry Correia’s craw and provoked him to write “The Social Justice Warrior Racist Reading Challenge, A Fisking” which, excluding the quotes, contains 2,830 of his own words for which he did not GET PAID! 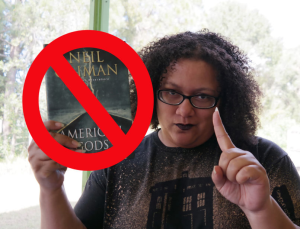 A rigorous piece of writing it isn’t. The very first thing he attempts is to interpret a photo accompanying Bradford’s post as though it’s evidence she’s not a credible writer about diversity. (Boldface in original.)

But the ironic thing about that picture? Tempest is wearing a Dr. Who shirt. A TV show about a white man and his white female sidekick, created by some white men, with episodes written by… Neil Gaiman.

Because how could someone advocate not reading white people for a year while wearing… I’m sorry, is there even a point here?

Correia also indulges in ad hominem (when doesn’t he?) dissecting her personality and family background. He begins —

From what I’ve heard about Tempest, she grew up in a rich family. Luckily one of my readers copy and pasted some stuff from her bio into the comments.

Yeah, that was lucky. Larry barely has time to trash Bradford (“I know when I think of marginalized lives, I think of mooching off your rich friends while playing tourist”) — his time is certainly too valuable to spend learning about her.

Although Correia is right about Bradford’s track record of playing a prominent role in controversies. That trait doesn’t ordinarily gain a person much sympathy. Yet reading Correia brought to mind the line about H.R. Haldeman in All The President’s Men: “You’ve got people feeling sorry for him and I didn’t think that was possible.” A raging bull response to an innocuous reading list will do that. The feeling only intensifies after seeing the abuse she’s received from others on Twitter.

And what about the children? Correia set a bad example for Sciphi, an impressionable blogger at Superversive SF, who saw that post and felt compelled to write down his own set of thoughts, worthy of Beavis & Butthead, “Take the SJW reader challenge today!”

So in the spirit of taking this challenge seriously, I will be making an effort to avoid such writers and see what it does for my outlook. So I guess I should make a list of authors that are “acceptable” to read because they aren’t “cis white het males” to make it easier for anybody that wants to join me.

And darned if that list doesn’t include five writers for the Mad Genius Club (Sarah Hoyt and Cedar Sanderson among them) plus a cast of favorites including Larry Correia and Vox Day – won’t Bradford be surprised to find she’s recommending them. Malicious obedience is certainly one tool for belittling an idea but, like the ruby slippers, it has to be handled verrry carefully. When your mockery of a recommendation to read works by women is followed by a recommendation to read works by women, then you’ve actually ratified the original advice.

80 thoughts on “Another Day at the Kerfuffle Factory”