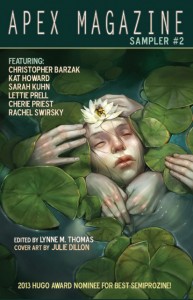 A second promotional print issue of Apex Magazine is in the works. Ordinarily available in electronic format, the sf/fantasy/horror monthly also makes its contents available to read free on its website. Money raised from advance sales will go toward the printing of the promotional issue and the production of Apex Magazine.

The 44-page print issue will have a Julie Dillon cover, stories by Christopher Barzak, Kat Howard, Lettie Prell, and Rachel Swirksy plus an interview with Cherie Priest and nonfiction by Sarah Kuhn. Signed copies are on sale through July 24 for $5 (plus $1 shipping). Only 1000 copies will be produced.

The first promotional issue featured stories by Sarah Monette and Elizabeth Bear, nonfiction by Jim C. Hines, an interview with Maureen McHugh, and a Scott Murphy cover. The eBook edition is still available free from the website here.

Update 07/25/2013: This project has been shelved, according to a note in my PalPal refund e-mail.