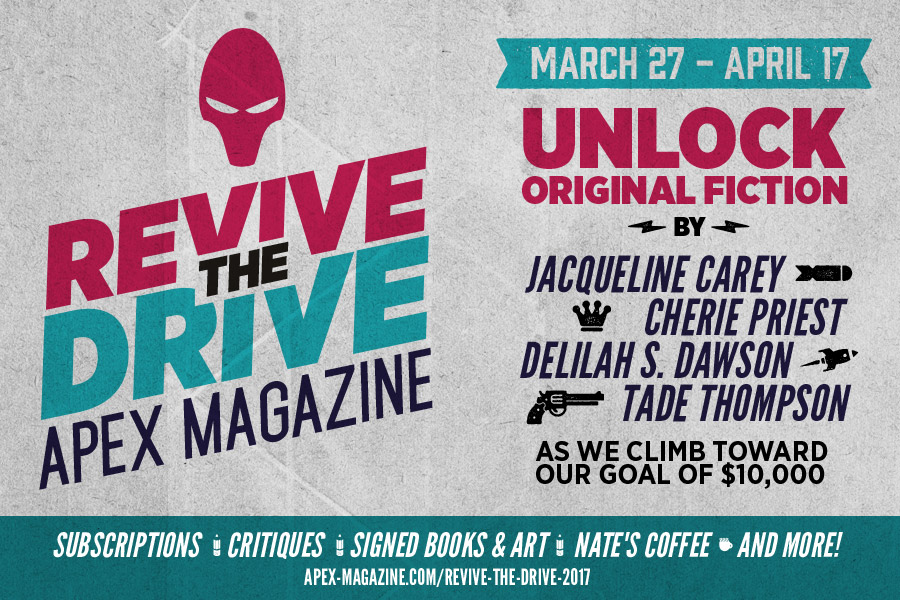 Apex Publications’ Revive the Drive subscription campaign has begun, and through April 17 they’ll be working to raise $10,000 to fund Apex Magazine this year.

There are new reward tiers to unlock, original fiction to add to the January 2018 issue, and other incentives for you to participate – check out everything they have to offer at the Revive the Drive store.

Apex originally started its 2017 subscription drive last October, but after the election they ended it early despite not achieving their goal; that was not a good time to be pushing a drive. Now they’re starting again: they still need to make ends meet.

During the drive Apex Magazine subscriptions will be marked down to $17 for 12 issues.

As people subscribe and the total on their funding thermometer goes up, the staff will unlock the following reward tiers:

Readers who already have a subscription can renew now for only $17 and add another 12 months to their existing subscription. Or make a donation of at least $5 and get a personalized Thank You! postcard from managing editor Lesley Conner—she has a stack of vintage sci-fi novel cover postcards that she’s just dying to share.

The easiest way to support the drive is to subscribe directly through Apex or by purchasing one of the many donated items offered exclusively during the drive, but anyone who prefers to subscribe through Weightless Books or Amazon can get their subscription counted toward the drive by emailing a copy of the receipt to Lesley at [email protected]