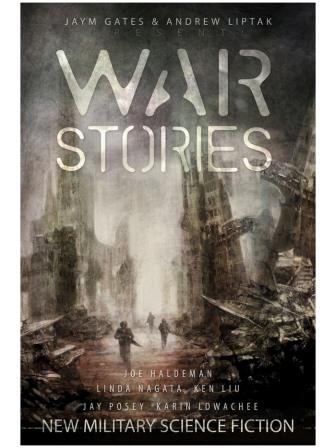 Apex Publications’ new anthology War Stories: New Military Science Fiction, edited by Jaym Gates and Andrew Liptak, contains 23 sf and fantasy stories dealing with the effects of war on soldiers and the people who love them.

War Stories isn’t an anthology of bug hunts and unabashed jingoism. It’s a look at the people ordered into impossible situations, asked to do the unthinkable, and those unable to escape from hell. It’s stories of courage under fire, and about the difficulties in making decisions that we normally would never make. It’s about what happens when the shooting stops, and before any trigger is ever pulled.

Two of these extraordinary stories can be read free online.

Karin Lowachee’s “Enemy States” is one of the best things I’ve read this year. Here’s a short quote without spoilers:

It didn’t occur to me until later that you’d lied about the experience. That you just wanted an excuse to do something I loved. That you dived in so readily and risked your limbs for an extra day together. “I’m not bad with machinery,” you said. “Just not used to roads.” We walked back to the garage, five miles pushing the bikes on snow–dusted road, with rockets from the base launching in the distance, returning your brothers and sisters to the stars. The contrails carved white across the blue sky, making wedgewood out of the Earth’s canopy. 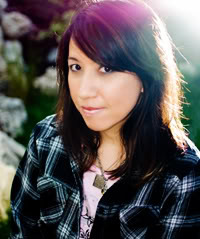 In this story emotion is at the forefront, yet it also conveys a detailed and unexpected universe in a matter-of-fact way – no infodumps. I was very impressed. It’s the first of the author’s works I’ve read and after finishing it I opened Google and began a crash course in Karin Lowachee. I learned she’s been writing for a long time. Alex von Thorn interviewed her a dozen years ago for SF Site — Next time I talk to him I must ask what he’s reading now.

The collection also reprints Joe Haldeman’s 1992 story “Graves,” which first appeared in F&SF and can be read online at Nightmare Magazine.

You tell people what you do at Graves Registration, “Graves,” and it sounds like about the worst job the army has to offer. It isn’t. You just stand there all day and open body bags, figure out which parts maybe belong to which dog tag—not that it’s usually that important—sew them up more or less with a big needle, account for all the wallets and jewelry, steal the dope out of their pockets, box them up, seal the casket, do the paperwork. When you have enough boxes, you truck them out to the airfield. The first week maybe is pretty bad. But after a hundred or so, after you get used to the smell and the godawful feel of them, you get to thinking that opening a body bag is a lot better than ending up inside one. They put Graves in safe places.

Haldeman takes the reader on a battlefield tour of places no human wants to be – with a payoff that makes those horrors feel familiar and safe by comparison.

Among the other well-known contributors are Linda Nagata, Ken Liu, and Jay Posey.

The full table of contents follows the jump.