An arrest was made the same day File 770 alerted readers to the theft of a van carrying rare books in Berkeley on February 16.  However, the van and most of the books have not been recovered.

Police caught one of the pair who tried to sell a few of the books to clerks at a local bookstore. The clerks became suspicious and called the authorities.

Police arrested Joshua Anderson, 30, of Concord after he and a companion allegedly tried to sell four of the stolen books — worth an estimated $13,000 — to Moe’s Books on Telegraph Avenue. Anderson, who had two outstanding warrants for his arrest, was arrested on suspicion of possessing stolen property. He is being held on $45,000 bail in the Berkeley jail. His companion has not been apprehended.

The books belong to Lawrence Van De Carr, a Chicago rare-book dealer. Van De Carr had driven a 2008 silver Ford Econoline XLT van with 30 boxes of books to Pasadena last weekend for an antiquarian book fair. On Monday, he drove to Oakland to stay at a friend’s house. He parked the van outside the home in the 200 block of Whitmore St., near 51st and Pleasant Valley. When he got up on Feb. 16 around 10 a.m., the van was gone, he said.

The boxes contained rare modern signed first editions, including literary works and science fiction books. Van De Carr estimates they are worth $350,000. He is not insured for the loss of the books.

Less than three hours after the theft was discovered, an attempt was made to sell some of the books at Moe’s in downtown Berkeley. (Hey, I’ve been in Moe’s!)

A short time later, around 1 p.m., two men came into Moe’s with four rare books. They started to talk to one of the clerks and got him to pay $100 for two science-fiction books published by Arkham House, according to Anthony, another Moe’s worker who was standing near the clerk. One of the books was A Hornbook for Witches: Poems of Fantasy by Leah Bodine Drake, one of only 553 known copies, said Van de Carr. It is considered one of the rarer books published by Arkham House and is worth around $2,200. The other was Always Comes Evening by Robert E. Howard

The clerk buying the books had been out to lunch when the call about the theft came, so he hadn’t known to be on the alert, said Anthony, who had taken the call. Anthony suggested to his co-worker that the two sellers go upstairs to the rare-book room to sell the other books. One of those was a signed, limited first edition of Pylon by William Faulkner, worth around $8,500, and the other was a limited edition of No Country for Old Men by Cormac McCarthy, worth around $1,300, said Van De Carr. Taken together, the four books were worth $13,000, he said.

“I thought they had a classic phony story: ‘The uncle died,’” said Anthony, who did not want his last name used because one of the men is still at large. “To my ears, ‘my uncle died,’ is equal to ‘the cat ate my homework.’”

While the two men were taking the elevator upstairs, Anthony called the rare-book room and told the clerk to stall the men. He then called Berkeley police, who arrived around 10 minutes later. The officers wanted to know how Anthony knew the books were stolen, and while they listened to the explanation, the two men got suspicious.

They bolted. One was caught nearby, the other got away.

Van De Carr says the theft will put him out of the rare book business. 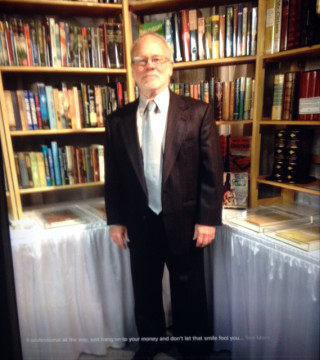 [Thanks to Petréa Mitchell and John King Tarpinian for the story.]

9 thoughts on “Arrest Made in Rare Book Theft”