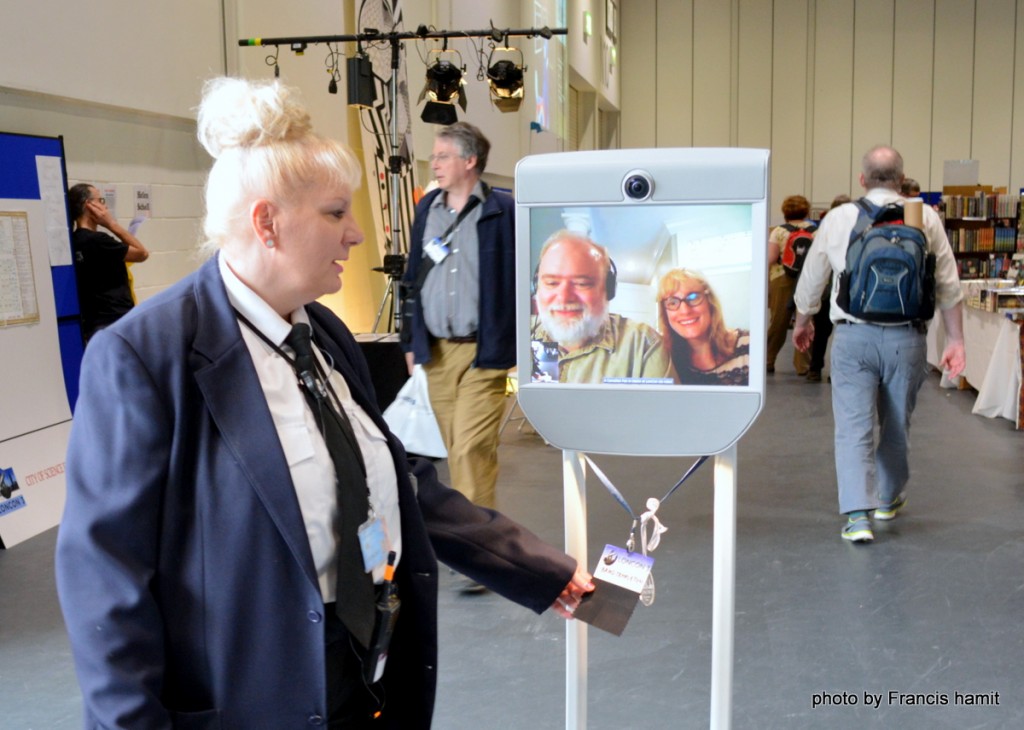 Brad Templeton and Kathryn Myronuk attended Loncon 3 using a mobile telepresence bot called a “Beam.” Physically, they were in Idaho the whole weekend. (Francis Hamit photographed them for his Loncon 3 report.)

Brad has just written a detailed account of the experience:

It was particularly rewarding to be the first to use a device like the Beam at a convention like this. Science Fiction readers were of course largely fascinated by it and a thousand photos were posed for and many tweets were sent out. Almost everybody was extremely friendly. Too friendly perhaps, as it became very difficult to travel with purpose, as every few feet people wanted to stop me and chat. People were super helpful because of the novelty. Others who have done this have noted that they go to events and have no trouble getting famous and important people to talk to them, people who would not normally do so if you were there in the flesh. If you want to meet people this is a good way to do it.

Many were super helpful. Not just opening doors and pushing elevator buttons, but being my hands when I went into a charity casino, or setting a place for me to watch the awards ceremony. (Because the Beam is 5′ tall it must go where it will not block other people’s view.) They were not just willing to help but eager, in order to enjoy the novelty.

The operations manager for the convention even asked me to do a volunteer ops shift, answering people’s questions, which I did, and got “Staff” status in exchange. With a bit of preparation, such as a link to the staff radio network and databases, there is no reason one could not do staff work piloting such a robot. Indeed, Suitable Tech believes many jobs can be done entirely remotely, and even staffs their experimental retail store with nothing but remote workers — there are no flesh humans in the store at all.

Kathryn Myronuk has written her own notes and observations on Making Light, such as —

* Fandom will be developing norms on how remotely-presenced people attend cons, and I can see serious talks coming up. We weren’t allowed into the video room or to JRRM’s reading. We were Ramez Naam’s guest for the Hugo Loser’s party, but we were only allowed in after the room voted on it [would a group of SF writers vote “no” to let a robot in?]

* As B notes, he bought a membership, our local London friend who brought the Beam was there for free as our mobility helper, and I was often on the Beam too. If we’d been asked to buy a second membership we would have, but it wasn’t asked. Were we two people attending? What will attendance mean? Will people”just” using it for convenience or budget be considered differently from people using one by necessity?

3 thoughts on “Attending Worldcon in a Robot Body: Brad Templeton Tells All”