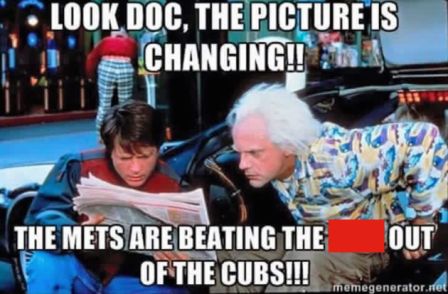 By James H. Burns: With all this talk of Christopher Lloyd and Back To The Future,  I’m reminded of a story.

And besides, today is the supremely talented actor’s seventy-seventh birthday.

Eight years ago, I met Lloyd, but it was a hardly a flux capacitor moment…

Or perhaps it was!

(Mad Magazine fans will find it fun to remember that Meglin had been on the humor publication’s editorial staff for forty-eight years!)

The musical had two early backers auditions in November of 2007, with something of an all star-cast:  legendary Broadway star George Hearn and Lloyd as the leads, with Adrienne Barbeau, Carol Kane, Conrad John Schuck and Garrett Morris. The cast performed a “reading” of the new musical, in what is essentially known as a concert setting, with no costumes or props, in a large room at the New 42nd Street Studios. 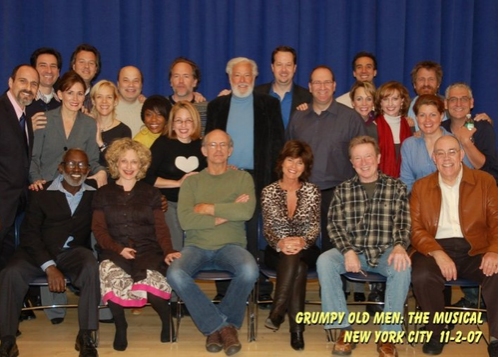 I don’t think, under usual circumstances, I would have sought Lloyd out, after the performance.  I generally don’t visit actors backstage after a Broadway or Off Broadway play.  I think it’s an imposition upon their time, unless they’re a friend.

(There are theatre people who highly disagree with me about this policy, and actually believe it’s also a good career move to be seen backstage after a show.)

There is one caveat to all this:  IF you’re pretty sure an acquaintance has spotted you in the audience, from the stage, then you have to visit, even if you have the best of intentions of not wanting to otherwise bother them!  (After one rendition of Hamlet, at a nice, but small Off Broadway space, I had to wait for a while to say hi to the production’s Ophelia…  She had smiled, “Hello,” if I recall correctly, just before her mad scene….)

But something odd had happened, after The Grumpy Old Men reading finished. George Hearn, who I’d run into at the erstwhile, and wonderful, Barrymore’s Broadway restaurant bid welcome, and some folks I knew from the theatre scene  came over to chat, as well as one gentleman whom I’d be stunned if he actually  remembered me:

Suddenly, Garrett Morris had me in the greatest, and friendliest and happiest of embraces!

Now, I HAD interviewed Garrett, twenty-eight years earlier, when he was starring on Saturday Night Live, in his dressing room at NBC, on a Saturday evening, at around 5:30… We had a nice time, and even chatted about Star Trek which, he said, would usually be on his TV, in repeats…

(“Jim, there’s a planet where women are in charge?” he asked me, laughing.  “That doesn’t sound like a particularly good idea…”)

I don’t think there’s any way he actually knew me.  I thought it was just another one of those situations where my having a familiar face had prompted a nice response!

(Morris, by the way, has had the most remarkable of second careers, guest-starring on a number of series, and appearing as a regular on Two Broke Girls.)

But there was some interesting mojo and charisma going on in the New 42nd Street Studios, perhaps simply from an excitement over what many felt had been a terrific musical, and performance.

The door to the side room that was being used as an informal gathering spot for the cast opened, and I decided to compliment Christopher Lloyd.

I talked about the show, and Lloyd continued to look flabbergasted.  He may have mumbled a few words, but he was seemingly so uncomfortable that with as much cheer and good will as I could express, I wished him a great rest of the day.

He hadn’t been rude.

It was just an odd encounter!

About a year later, the musical had a developmental workshop in New York, with some cast changes, including F. Murray Abraham and Marilu Henner in the Lloyd and Barbeau roles. The musical, which still has its sights set on Broadway, got its world premiere at the Royal Manitoba Theatre Centre in Winnipeg in 2011, starring John Rubinstein and Susan Anton, with Shuck now “promoted” to the other top part.)

But there was an interesting denouement to the Lloyd tale…..

About a year later, I finally read Walter Koenig’s autobiography. I had known Walter since 1976, but had been out of touch for a number of years.  I was about to discuss some business and film ideas with him, and figured I should refresh my memory.

Koenig, it turns out, went to acting school, with Christopher Lloyd, at the Neighborhood Playhouse, in Manhattan.   (Another of their classmates was James Caan…) 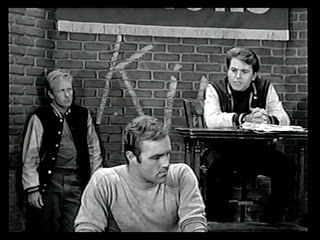 Koenig and Caan some years after the Neighborhood Playhouse, starring in Harlan Ellison’s “A Memo From Purgatory,” on The Alfred Hitchcock Hour, in 1964

Lloyd and Koenig had been compadres, but hadn’t seen each other in ages.

After a performance, somewhere, Koenig went to say hello to his old “college friend.”

And got essentially the same reaction I had received, some years later

(Perhaps this was somewhere on the set of Star Trek III in which Lloyd played Klingon Commander Kruge, although the actors shared no scenes together.)

I told Walter what had happened, and suggested that perhaps the otherwise amenable Lloyd just possessed an odd quirk.

Koenig still didn’t seem happy. Not everyone, of course, has a sharp memory, or perceives in the way one would presume.

But it’s intriguing to ponder an overhead shot, of those acting school days on New York City’s Upper East Side, with the future Mr. Chekov and Doc Brown hobnobbing, and Rollerball’s Jonathan Eden (not to mention Alien Nation’s Detective Matthew Sykes)  somewhere on the block.

Happily, all the actors had many other roles of note, as well.

5 thoughts on “Back to Another Future”