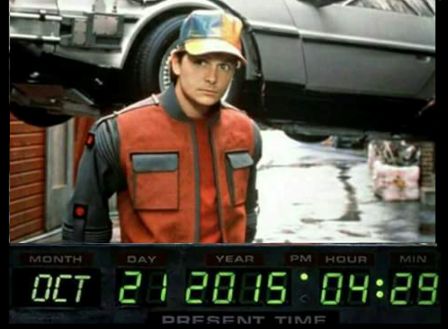 Today, Marty McFly’s arrival in the future, our present, by hoisting a stein of “Doc Brown Ale” at Iron Hill Media in Newark, Delaware.

Head Brewer Andrew Johnston will introduce Doc Brown Ale, a medium-bodied ale, deep brown in color with smooth nutty and chocolate malt notes. According to Johnston, “Roads? Where this beer is going, it don’t need roads!”

Doc Brown Ale, clocking in at a very drinkable 5.5% ABV, will be on draft for a limited time exclusively at Iron Hill Media. The brewpub is also asking Back to the Future fans to dress up in movie-inspired attire for the occasion, so run to the thrift store – or into the far reaches of your closet – and dust off those old denim jackets, Guess jeans and Hawaiian shirts, unless you’re lucky enough to own a futuristic auto-drying jacket.

“Back to the Future is an all-time favorite of ours here at Iron Hill and we wanted to have some fun with this cult phenomenon,” says Johnston. “Consider the brewery my version of Doc Brown’s garage. I even ordered Marty McFly’s puffy red vest to add to the revelry. Would Doc actually drink this beer? Great Scott! We would like to think so.”

But don’t drink and drive the electric DeLorean to be unveiled today at Queen’s University Belfast.

Dr David Laverty, who leads the project, said: “This project was about modifying a car into an electric vehicle, but we wanted to do it in style.

“The DeLorean was the obvious choice because of its strong connection to Belfast and its starring role in the Back To The Future movies.”

How well did Back To The Future score in predicting technological innovations?

Still, the film did get some things right.

Though not yet in full swing, we also have biometric technology for paying bills or unlocking doors with a fingerprint, and off-the-shelf smart glasses similar to those worn by Marty’s offspring.

“It was actually quite visionary of them to get so many things right,” said Thomas Frey of the DaVinci Institute, a futurist thinktank.

“They depicted it in kind of a comical, goofy way actually, but I think they did quite a phenomenal job back then of anticipating things that must have seemed fairly ludicrous at the time.” 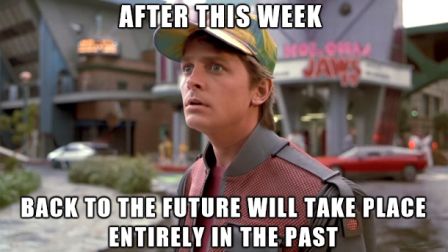 [Thanks to Will R., Martin Morse Wooster and John King Tarpinian for these stories.]

16 thoughts on “Back To Just About Now”