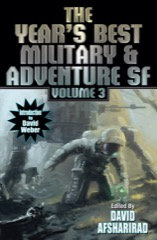 The victorious author receives $500 and a plaque commemorating the award at Dragon Con. The first two winners were Michael Z. Williamson for his short story “Soft Casualty” (2014), and David Drake for “Save What You Can” (2015), set in his genre-defining Hammer’s Slammers series.

The Year’s Best Military and Adventure SF, Volume 3 will be released June 6, 2017. The third volume contains a preface by Afsharirad and an introduction by New York Times best-selling author David Weber, as well as fifteen short stories, selected from online and print periodicals, and original anthologies.

David Weber’s introduction asks “What Is ‘Military Science Fiction’?” He says it has a mission:

Today, in the Western World, personal experience of military conflict is actually quite rare and concentrated in hugely disproportionate fashion among those who volunteer for military service. Civilians take it for granted that they will be protected from conflict by those who serve in the military, and those who do not serve in the military have little or no first-hand familiarity with what our military guardians experience in our place. Most professional Soldiers, Sailors, Airmen, and Marines of my acquaintance think that’s the way it’s supposed to be. That if it isn’t that way, they aren’t doing their jobs. But because they are, those of us standing behind them have no personal, experiential guide to what it is we truly ask of them.

One of the responsibilities of those of us who write military fiction is to provide a window into what we ask of them. Into the consequences of what is demanded of them. Not simply to venerate them, or to celebrate the “thin line of heroes,” although that is one of our responsibilities, because the men and women who have died for us deserve to be venerated and celebrated, but also to help us understand. To recognize not just what they have given and are giving for us, but the fact that they stand where they stand, face what they face, because we put them there.

And we need to understand the price they pay for being there because if we don’t—if we trivialize it or romanticize it into something one bit less horrible than it is—we forget that the reason we put them there had damned well better be worth that price.

More information about the book, and voting instructions once that begins, will be found on the Baen website.