James H. Burns wonders, “How would you like to be the folks developing that MEGA budgeted King Kong stage musical in Australia (with an eye towards Broadway), and find out that there’s a low-budget parody playing in Manhattan…?”

The Australian King Kong musical is now playing at the Regent Theatre in Melbourne under the direction of Daniel Kramer, with a score featuring Kong contemporaries like I Wanna Be Loved By You, Brother Can You Spare A Dime and Get Happy and new compositions from Guy Garvey, Justice, Sarah McLachlan, The Avalanche, 3D from Massive Attack and Marius de Vries.

The on-stage Kong is six meters tall, weighs a ton and is operated by a team of puppeteers.

A lot closer to Broadway, the City Parks Foundation’s Summerstage series will present a hip-hop version of King Kong from July 30 through August 22, first in Brooklyn then at various other locations. (Overall, Summerstage runs events at 17 locations in all 5 NY boroughs.)

The Gold brothers, the owners of a failing R&B label (Gold Records) are in search of a musical savior. Having heard of a mystic place, a lost world cut off from the rest of civilization by the East River to the south and the Cross Bronx Expressway to the north and enshrouded in the fog of a thousand apartment building fires set by absentee landlords, the legendary South Bronx of 1978 is also the home of the most talented artist alive. Kong is an M.C. and natural genius of rhyme and rhythm whose awesome powers transcend artificial categories and defy the crass and hackneyed formulas of the commercial music industry. In hot pursuit of Kong, the Gold brothers hire a beautiful secretary, Faye Wellington, and go off to capture this force of nature in order to profit from Kong’s gifts and share his music with a world desperately in need of inspiration…

Still, the question before the house is — will New York have enough bananas to feed two King Kong musicals? 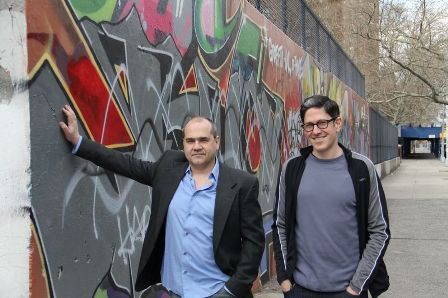