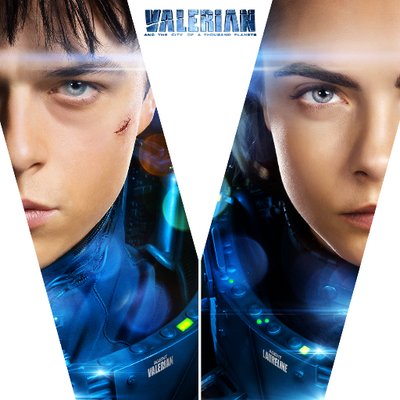 Valerian and the City of a Thousand Planets (2017, **) with  Dane DeHaan, Cara Delevingne, Clive Owen, Rihanna, Ethan Hawke, Herbie Hancock, Kris Wu and Rutger Hauer. Based on Valérian and Laureline by Pierre Christin and Jean-Claude Mézières, Written and Directed by Luc Bresson.

Every now and then, I have the bad habit of get so hyped up to see a sf film that when I survey the results afterward, I feel so disappointed.

Why yes, I did go and pay to see Valerian and the City of a Thousand Planets. Is it that obvious?

And it’s going to be an EXPENSIVE train wreck ladies and gents; independently produced with a projected budget between $180 – $200 million dollars and a breakeven point of nearly $400 million, Valerian and the City of a Thousand Planets has just grossed an estimated $17 million in it’s opening weekend in North America and a here it is a week later with a worldwide gross of $34,596,147. (Source: http://www.the-numbers.com/movie/Valerian-and-the-City-of-a-Thousand-Planets-(France)#tab=summary  Sunday, 30 July 2017) 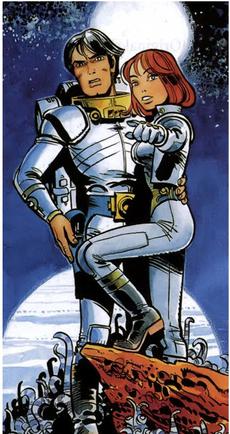 This is a shame because the well-known writer-director- co-producer of this effort, French auteur Luc Besson, had excellent property to adapt, the well-known and beloved French comic book series Valérian and Laureline created by Pierre Christin and Jean-Claude Mézières.

The plot of the movie follows Major Valerian and Sergeant Laureline, two of the top agents of an intergalactic police force, are assigned to retrieve the last known specimen of an alien species being held hostage by ruthless criminal elements hiding out in inter-dimensional shopping mall. Little do they know that the rescue of the adorable and cuddly little creature is merely the tip of a conspiracy that spans the galaxy…

So, if I were a producer or a potential investor for this film and Luc Besson’s script, audition shots and production design plans landed on my desk, I’d be tempted to write the following notes to the director:

Note One: Casting — The two leads, Dane DeHaan and Cara Delevingne, don’t look like hard-core soldiers and covert operatives, they look like they just graduated from high school! He seems to be mouthing his lines like a weak imitation of Keanu Reeves and she seems to be nothing more than a warmed over version of Hermione Granger. You know, what would be MORE interesting? If Ethan Hawke and Rihanna (who you have cast in two lesser, glorified cameos), were cast as the leads; he for his solid acting chops and her for her persona, which radiates nothing less than sheer star power. Which is what this movie is going to need. IN ABUNDANCE!

Note Two: The Workplace “Romance” — Yeah, I know Valerian and Laureline are romantically linked in the comics but we live in the 21st century, Luc. As you MUST KNOW Luc, the first rule in adapting a work for the screen is not being so reverent and a slave to the text.  When you do that, it boxes in your ability to be more malleable with the material, which is something you want to have during the production phase. When Valerian professes his desire to get into Laureline’s pants right at the top of the movie, her protestations, no matter how well she acts or dishes it back to Valerian, it automatically makes THAT the ultimate goal of the screenplay, NOT what she truly believes or desires. And you can imagine, Luc, how modern women are going to feel about that when you put THAT up on the screen? Plus, personally speaking, if Valerian had pulled that crap on me while we were on the job, I’d report him, have his ass demoted for sexual harassment and marched right down to the stockade for remedial training in how to behave while on duty. I think it should mainly involve making bigger rocks into smaller rocks in a very unpleasant climate.

Note Three: Sexism — And although Laureline is seen as smart, gutsy, competent and strong, she’s practically the ONLY woman in the script with a major speaking role. WHERE THE HELL are the other women????? It’s supposed to be set in the 28th century.Duh!

Note Four: Valerian and Laureline’s rescue of the creature in the first act looks great. But after that, the subsequent acts are less appealing; it seems as though it was written by a 13-year-old boy who frantically wrote his homework Sunday night to be handed in the very next day. And while the climax looks like loud, noisy fun (because you can NEVER go wrong having Clive Owen being beaten to a pulp) almost everything that preceded it makes it look rushed, shallow and dumb. It’s only saving grace are the visual effects, which are truly spectacular.

Valerian and the City of a Thousand Planets is crashing and burning at the box office and it seems as though it will not make back its initial investment, even with some modest oversea grosses and potential dvd sales. And you can forget about establishing a tent pole series because NO ONE will want to invest their time, money and prestige on backing a franchise that lost a bundle coming out of the gate.

My advice to you, the reader, is to skip this one altogether or watch it home as eye candy for your weary brain late one evening when you have nothing better to watch.