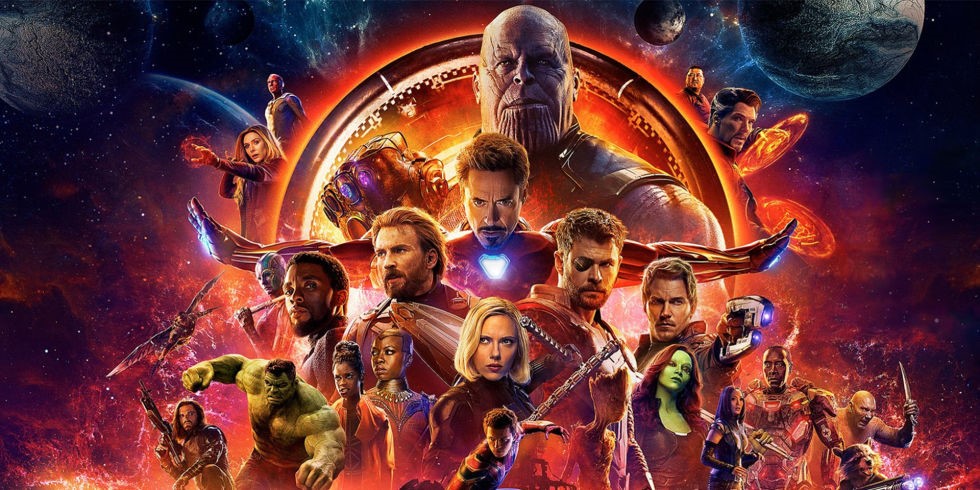 We’ve come a long way since we were first introduced to the cinematic version of Marvel Comic’s Tony Stark, the “billionaire genius playboy philanthropist”, the first protagonist of the Marvel’s movie universe. The success of the 2008 movie has spawned eighteen loosely interconnected sequels which culminate the ultimate Marvel extravaganza, Avengers: Infinity War, which premieres today.

This was the conflict that we have long-awaited since the tantalizing appearance of uber-villain Thanos in an extra scene at the end of the first Avengers film in 2012. He’s an alien with a very specific goal; obtaining the six mystical stones of Time, Mind, Reality, Power, Space and Soul, that when fitted into a specially designed gauntlet, to become the most powerful entity in the universe.

Although this story has already played out in a series of comics published in 1992, millions of movie fans are anxiously awaiting what screenwriters Christopher Markus and Stephen McFeely and co-directors Anthony and Joe Russo have in store for the twenty-two assembled heroes.

Looking back over the past decade’s worth of superhero films, Marvel Studios is clearly triumphant in every sense of the word, culturally, critically and especially financially. Despite their best efforts, the competition from DC Comic’s entries has only seen some marginal gains at the box office. Their next release, Aquaman, is scheduled far, far away from this weekend, which should see the record box office receipts either match or exceed the opening grossed of Marvel’s previous film, Black Panther.

And as all of this is unfolding, I cannot help but wonder if with this release, the superhero movie is approaching the apex of its popularity with the film going public. How can any studio, even Marvel, go any higher, keep up the esthetic pace and production values before it loses its audience and the whole enterprise collapses in on itself?

And the real question everyone should be asking is does Kevin Feige KNOW when these movies have reached a saturation point and go out on top? Speculation has been running rampant about which high-priced actors and/or characters character will die or survive the calamitous encounter with Thanos. Is there a calculated plan to keep the Marvel Cinematic Universe alive for another decade?

Needless to say, if Marvel keeps delivering films like Infinity War, it ‘s guaranteed that they’ll will be around for around for at least another decade.

As the film opens, Thanos and his enforcers have attacked and overrun the ship containing the survivors of the destruction of Asgard. Although a wounded Thor doesn’t know it at that moment, his brother Loki possesses the Space Stone (otherwise called “the Tesseract” in previous films).

Meanwhile, Thanos’s agents are on Earth seeking the Time Stone from Doctor Strange and the Mind Stone, which is resting in the forehead of one of the Avengers, The Vision. Wanda and Vision are ambushed in Scotland, Captain America, Black Widow and the Falcon arrive to help.

When alien craft land in Manhattan, Iron Man and Spider-Man swing into action. The Guardians of the Galaxy are drawn into the action when they rescue Thor and discover that Thanos has attacked the Nova Corps home base and has the Power Stone. Realizing that her step-father may be close to obtaining all six stones, Glamora makes a strange and compelling request of Peter Quill…

As these story threads are spun out on Earth and throughout the galaxy, other heroes and villains will be drawn together in a deadly game of pursuit and combat. And at the center of it all is Thanos, powerful, regal and seemingly omnipotent, he sees as the savior who must destroy half the universe in order to save. As portrayed in motion capture by Josh Brolin, he exudes a single-minded passion in his quest for genocide.

I must say that I have to admire the audaciousness and skill of the Russo brothers in making Infinity War. I have already heard some criticism regarding the story being too spread out and the short shrift some characters receive in the exposition of the story. My only comment as a long time reviewer and lifelong fan is that this movie could not have possible been executed any better and in any other way.

And believe me; nothing can prepare you for the ending of the movie. Prepare yourselves to be shocked, bewildered and dismayed. There is only one extra scene, a cryptic shot that takes place after all the credits have run. It provides a single ray of hope that may hold the key to salvation.

In the meantime, enjoy Ant-Man and the Wasp, which opens on July 6th.