THE GREATEST SHOW OFF EARTH – The Total Solar Eclipse of 2017

The eclipse began in the middle of the Pacific Ocean, up through central Mexico, across the Caribbean, up the Atlantic coast where Virginia Beach, VA and Halifax, Nova Scotia were in the path of totality and then out over the ocean.

Not only was I watching the coverage on network television, I also took a pinhole projector outside (as instructed by our science teacher) and watched in fascination as the Moon cover up 77% of the Sun. I remember feeling disappointed; I had seen eclipses depicted on television and the movies and I was anticipating that the sky would be become darker than what actually occurred, which was a slight was dimming around the horizon.

But the main thing I remembered was a science correspondent intoning that the next great solar eclipse would happen in the year 2017. I sat on the sofa and thought about THAT for a while. I tried to just imagine what life would be like that far into the future. What would I be like then? Would I even be alive? I was thirteen years old.

And today, August 21, 2017, a day I had been anticipating and preparing for forty-seven years was finally here.

I was awake at 6:20 a.m. The plan was good, the plan was simple. I drove from Cincinnati to Middletown, Ohio, to meet some old friends with airplanes, Doctor Bruce Walls (Retired) and his wife and navigator Liz and I will fly in a borrowed Cessna 182. Bruce’s nephew Mike, his wife Megan, their two-month old Daisy and mutual friends Jason, his wife Stephanie and two daughters, eight-year-old Sophia and five-year-old Olivia were in a Cessna 210. 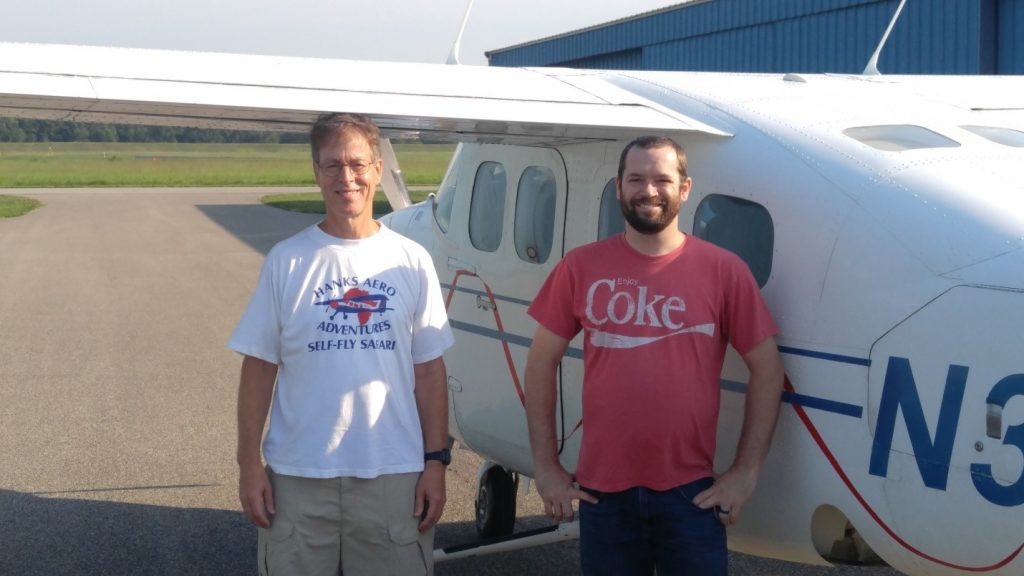 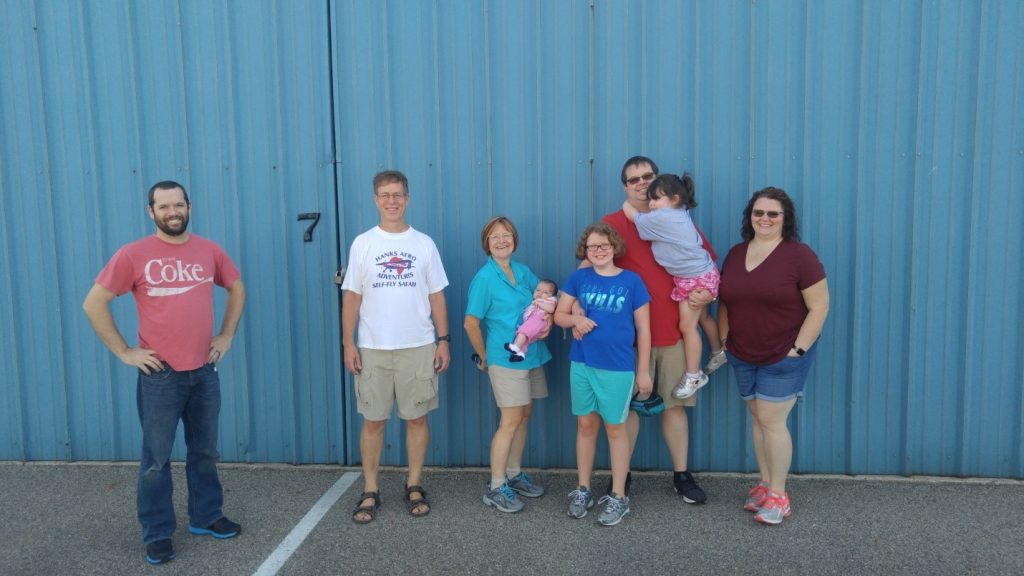 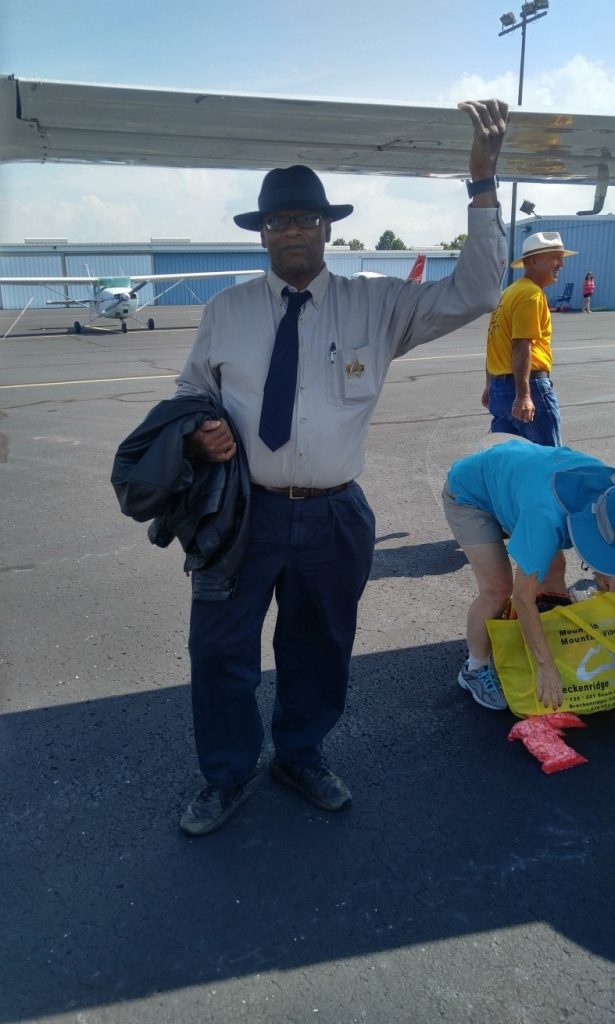 In the preliminary planning, the pilots had decided on going to one of three airports directly in the zone of totality, depending on weather conditions:

On Sunday evening, the choice was made; the Upper Cumberland Regional Airport located between Cookeville and Sparta, TN was the closest spot AND had an excellent forecast for clear weather. When Bruce made reservations for the two planes, he also inquired about expected influx traffic at the airport. The manager on duty told him that they were expecting more planes than they thought and that the sooner we arrived, the better chance they had of securing their spots. This necessitated moving up our departure from 10:30 a.m. to 9 a.m.

After checking the fuel levels and other pre-flight checks, we departed; Mike in the first plane took off first and we followed 20 minutes later. 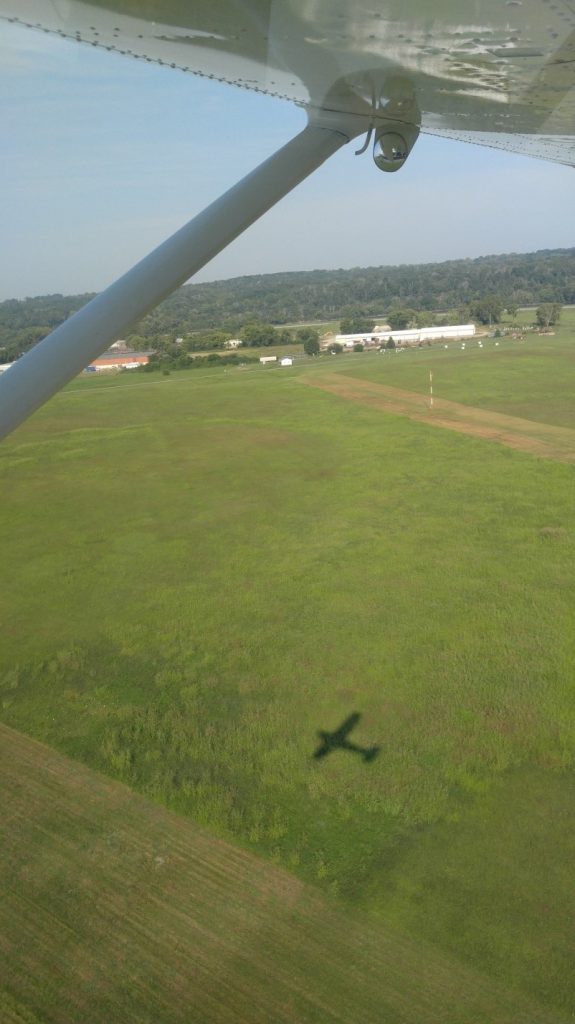 In Transit To Sparta

Ascending, our plane rose above a light, but noticeable layer of haze. When I remarked about that, Bruce responded, “Well, this is actually pretty good flying weather for this time of the year.”  He also reassured me that the weather in Sparta was mostly clear and probably would not affect our viewing of the eclipse.

The only problem both planes had in transit was detouring around the airspace surrounding the Greater Cincinnati Airport due to the normally heavy traffic patterns. But this only added ten minutes to our flight time. 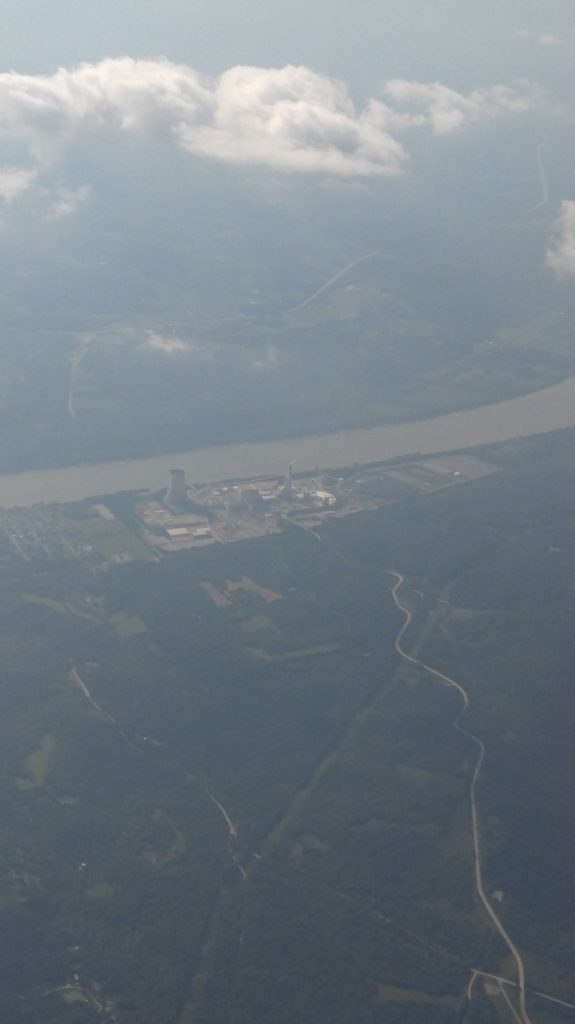 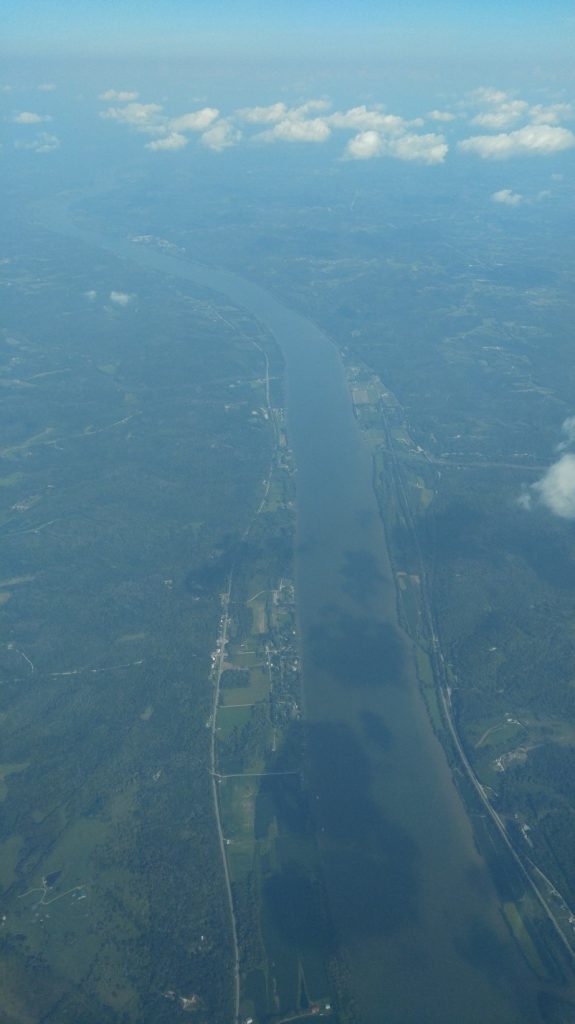 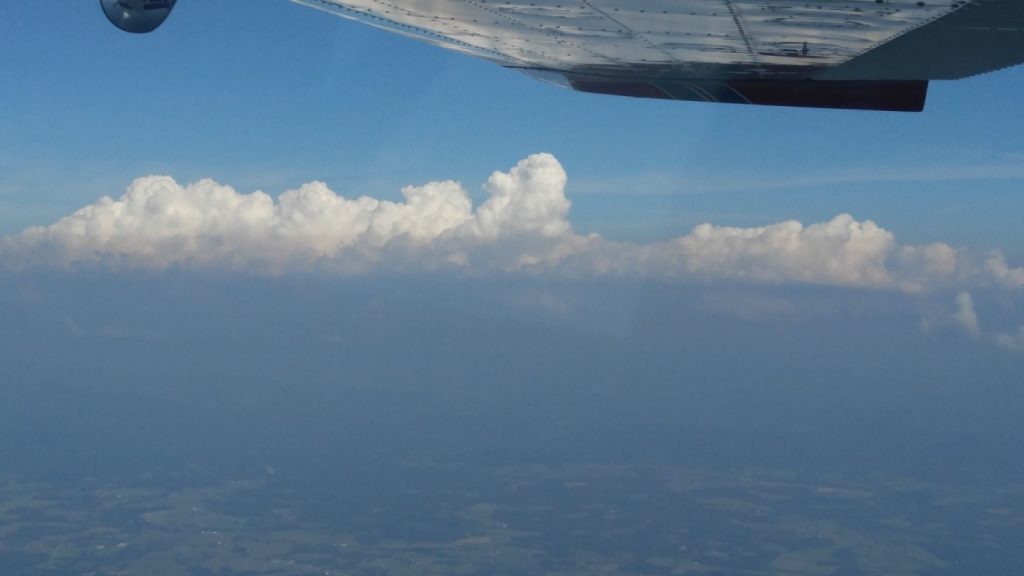 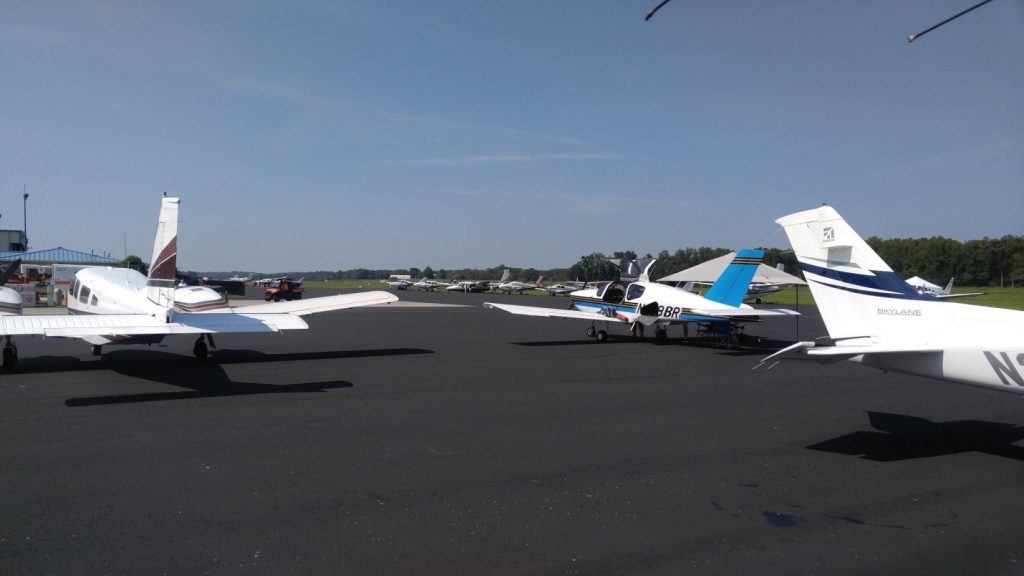 An hour and a half later, we entered Upper Cumberland airspace of our target airport. Mike landed with a little difficulty as several planes request to land on the single landing strip at the same time. Apparently the word had gotten out to pilots in the area that the weather was clear here and this place had become a prime spot for viewing.

As Bruce was approaching he got an urgent call from two other pilots approaching from the southwest that they were aborting their flight paths. I knew that both Bruce and Liz had logged thousands of hours flying in all sorts of conditions so I wasn’t too worried…until I glanced back over my shoulder as we backed downwards and saw a Beechcraft Bonanza less than a quarter of a mile away and a few hundred feet below us turning very tightly to the right!

So, I just clenched my teeth slightly and settled back in my seat for the landing, which Bruce executed perfectly. After taxiing to a spot between two rows of hangers, we exited the plane to see that there were at least several dozen planes, fixed wing, small jets, helicopters and even an auto-gyro (?!?) lining the taxiways and hangar areas.

At 10:45 a.m. (Central) local time the sun was high over the airport and climbing. It was hot, almost 90 degrees but it was not very humid. The skies were clear, save for a few scattered cumulus clouds. The airport had set up a huge tent in a small field off one of the service areas. Nearby there were two food trucks and a small open trailer serving homemade machine cranked ice cream.  We all settled into the tent feasting on hot dogs, calzones, hamburgers, chips and cold beverages, all the while taking a glance upward with our eclipse glasses. 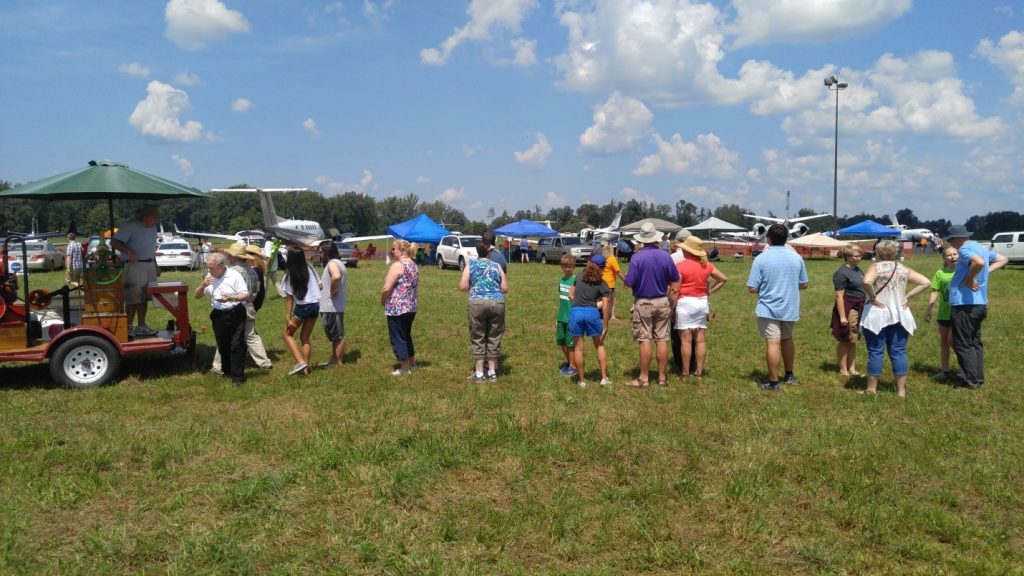 The line for the machine made ice cream.

All the while, a public address system in a tent nearby was playing a parade of sun and moon related songs including Frank Sinatra’s “Fly Me to the Moon”, Creedence Clearwater Revival’s “Bad Moon Rising”,  Pink Floyd’s “Eclipse”, Bill Wither’s “Ain’t No Sunshine” and, of course, Bonnie Tyler’s “Total Eclipse of the Heart.” Jason complained that the dj should be severely reprimanded for not adjusting the bass, which he claimed was set too high.

At a few minutes past noon, we all looked up and noticed that the Moon had begun to cover the Sun at around the one o’clock position.

At 1:00 p.m., the Moon had covered more than fifty percent of the sun. Twenty minutes later the sunlight around the airport had noticeably dimmed.

Then the music stopped and Krystal Tyler, a postdoctoral researcher at the School of Physics and Astronomy at the Rochester Institute of Technology came on to explain that totality would begin in a few moments. She also advised everyone NOT to remove their protective glasses prematurely, least they damage their eyesight!  The ONLY time we should remove the glasses was during full totality. The total amount of time in totality was estimated to be 2 minutes and 39 seconds. 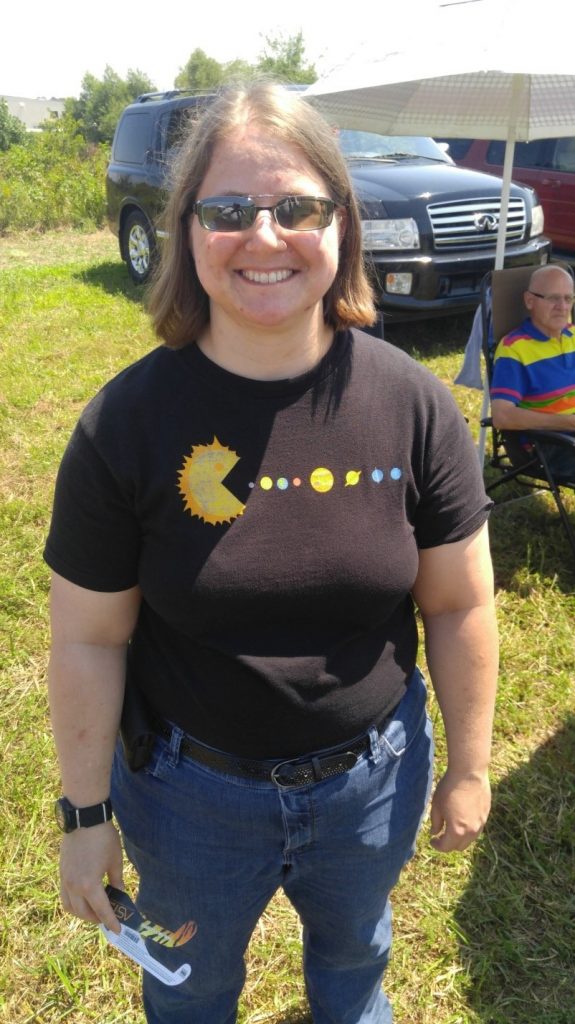 Krystal Tyler, Postdoctoral Researcher at the School of Physics and Astronomy at the Rochester Institute of Technology.

Once she finished speaking, I hustled over quickly to get her name and take a picture for posterity. Once that was done, a woman standing near us glanced at the Star Trek Voyager comm. badge I was wearing and asked in a stage whisper, “Hey can you actually talk into those things?”

“Are you ‘asking for a friend’, I asked in an amused tone.

“I’m sorry, that’s classified,“ I said with a laugh. She gave a hearty laugh as well.

It was then that most of our party (except for Megan and Daisy) emerged from the tent and walked fifty or so yards into a clear spot approaching the runways. We turned to gaze towards the northwest, where the immense, seventy-mile-wide shadow was bearing down on us at a thousand miles an hour.

I had hoped to capture the moment the shadow enveloped us by aiming my cell phone at a white building beyond the runway by about half a mile away. The transition was too fast for my eyes to discern. You will notice that as well in the nine-minute video I shot.

I tried to capture all of the ambiance of the event by making sure there were a few 360-degree shots, especially of the distant horizon, where the sun was shining outside the zone. Some of my companions can be heard shouting that they could see Mercury and several prominent stars, but I focused in on getting a shot of what I thought was Jupiter but must have been Venus, a fuzzy but unmistakable presence just off the right of the eclipse. 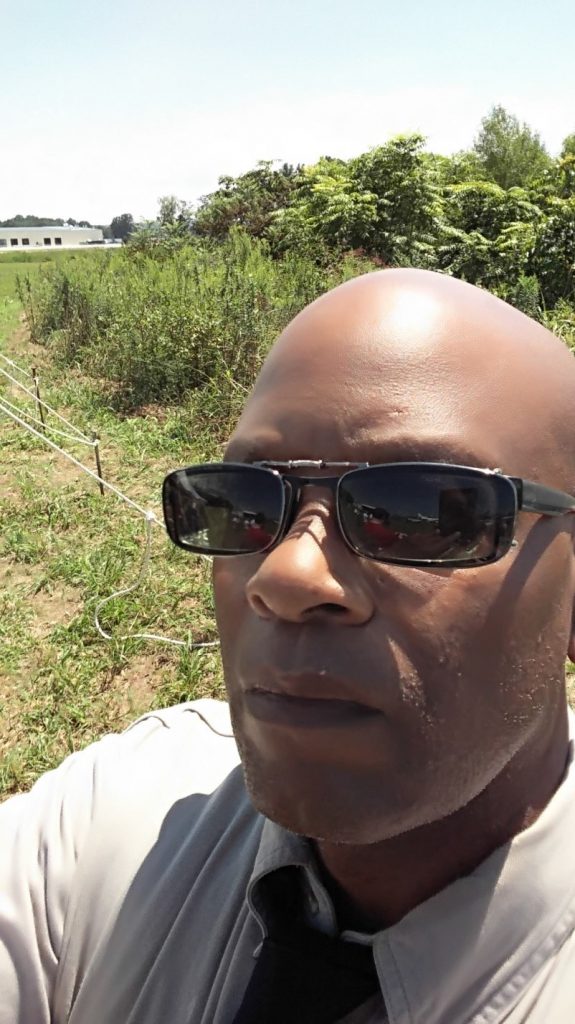 2:13pm: There is a noticable dimming of sunlight, especially around the horizon.

And I as I tried to hold the camera steadily, I glanced upward to see the eclipse…which looked BETTER and MORE AWE INSPIRING than any special effect I had seen in any movie! EVER! 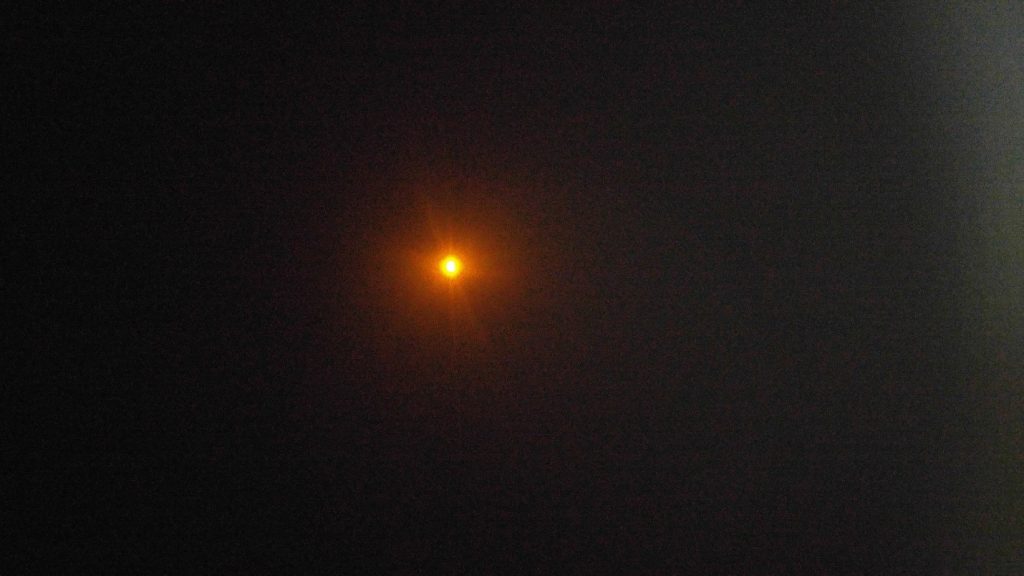 2:22pm: Photo of the Sun taken with the cell phone with the lens covered by the eclipse glasses. Cell phone cameras are notorious for taking terrible pictures of celestial objects…

But just as I was getting used to the darkness, it was over. The Sun emerged to the gasps, cheers and laughter of the crowd of thousands.

And, as the sun fully emerged, the audience sprinted towards their planes.

Mike and his crew were gassed up and gone in ninety minutes, Bruce Liz and I followed a half an hour later. The flight back was uneventful and we landed back in Middletown around 5:30 pm local time, just 20 minutes ahead of a line of thundershowers approaching from the west.

Well, I can truthfully say that I witnessed one of the most profound spectacles of my lifetime.

The next great North American solar eclipse will occur on April 8th, 2024 and it is happening practically in my back yard: https://eclipse.gsfc.nasa.gov/SEgoogle/SEgoogle2001/SE2024Apr08Tgoogle.html