By Bill Warren: I’ve never met someone who was so enthusiastic, ebullient, upbeat all the time.

People don’t quite seem to realize how VERY unusual he was — not really so much so in his fiction (though nobody else ever wrote like him), but in how he used his fame.  He was EVERYwhere in Los Angeles, turning up for many events, always upbeat, always booming and very much there (that stunned me when I first met him; I thought he’d be a shy, quiet poet type, not so much like say Jack Carson or Sonny Tufts).  He had a direct, forceful way of talking that still seemed fresh and spontaneous and friendly, dropping in little affirmations (“doesn’t it?” “don’t they?”) of what he’d just said.  He was just about the most PUBLIC writer I have ever seen, or will ever see again.  He was a very big booster of Los Angeles, so much so that it still seems a little odd that he ever lived anywhere else.

Side note: I read, then heard directly from him, about how he changed his mind about Disneyland.  At first, he was highly skeptical of the place, and of Walt Disney.  He refused to go to the park for a couple of years, then Charles Laughton, “the biggest child on Earth,” impatiently took him by hand and down to Disneyland, where he showed Ray that the place was not at all what he had imagined it to be.  Too bad there are no photos of Laughton leading Bradbury around Disneyland.  To me, that’s as wonderful a thought as imagining Ray Bradbury as a grandfather.  He would have been the greatest grandfather who ever lived — except maybe for Walt Disney.

Today, I thought further on the strange tale (I think I heard it from Bill Nolan) that in the 1940s, Bradbury had a big bonfire in his back yard, where he burned all his unsold stories–and he must have had hundreds of them.  At first, I was horrified — all that great Bradbury stuff, gone up in a gout of fire, undoubtedly burning at Fahrenheit 451.  But then I realized what it was: His way of ensuring that he would not be followed around by the ghosts of his past writing, of stories that he knew weren’t as good as what he was turning out by then.  He also knew he had become a professional writer; he couldn’t yet have been certain that he could be the sole breadwinner of his (new or about to be) family, but he knew he could write stories that would sell.

I hope someone more skilled than me can write about the habits of Ray Bradbury, Professional Writer.  He said he wrote a thousand words every day of his life, and I have no reason to disbelieve him; I’ve heard that he kept on doing it, up until a few months before he died.  That indicates a steely, hard-learned discipline — even though he came on like a house afire (which greatly surprised me), even though his reputation at LASFS was that of a practical-joking chatterbox, he was very serious about becoming a writer.  Then he was very serious about BEING a writer; he was just about the most public writer I’ve ever heard of.  He loved being famous, and he used his fame very wisely, and very often.  Okay, so his plays were usually not very good, and his poetry was limp, but long ago he won the right to be judged by his best work.  Don’t all writers have a falling-off period?

Take a look at his Internet Movie Database (imdb.com, I think) pages; he wrote for a LOT of TV series in the 1950s, many more than I knew about, some of which seem highly unlikely as a venue for Bradbury material (Steve Canyon???), but he was a pro, and pros sell their stuff.  He even wrote 65 scripts for his own Ray Bradbury Theater, which was often not all that good, but by George, he did it, he did it.  There’s a whole lot of filmed Bradbury, much more than most people realize–and even more yet when you count all the student and amateur productions of his work.  He told me that he allowed any film student who asked to adapt his work, as long as they sent him a print of the finished product.  As he said this, he gestured sort of absently toward the darker recesses of his basement office, where there was a lot of room.  I hope his family considers collecting the best of those student films into a set of DVDs.

I’ll attach three or so photos.  The black-and-white was taken (by Daugherty) at a big surprise party for Forry in 1967, about five minutes after I first met Ray Bradbury.  We swapped glasses, and found our prescriptions were similar. 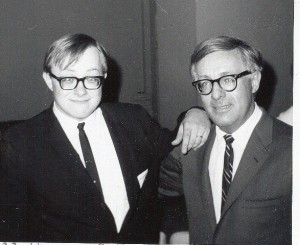 The shot of Ray talking was taken at the 2nd LASFS clubhouse in North Hollywood, when it was still under construction. 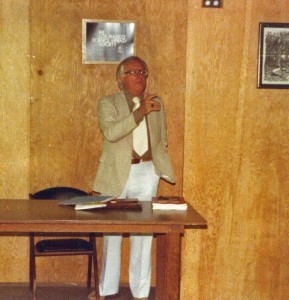 The odd shot requires a little explanation.  Remember the Lytton Center for the Visual Arts?  (I think that was the name — the basement of a savings-and-loan place that was at the corner of Sunset and Laurel Canyon)  One night, they showed something of interest; Beverly and I, and our friend Jon Berg, went; so did Forry, Bradbury, Ray Harryhausen and his wife.  We were there for a movie, but there was also a current display of slightly eccentric wire sculptures.  One of them was of an elephant, and was about half the size of a baby elephant.  It had a door and a stool inside; you could sit there and waggle the trunk and ears.  I did this to amuse Harryhausen (“Is this how you do it, Mr. Harryhausen?”) but Bradbury got all excited and insisted I get out so he could get in.  He, too, waggled the ears and trunk and declared “I am the spirit of the elephant!” 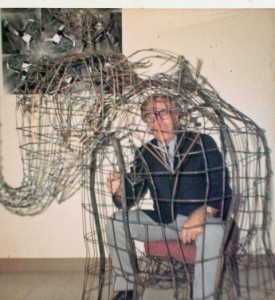 Ray Bradbury as the Spirit of the Elephant.