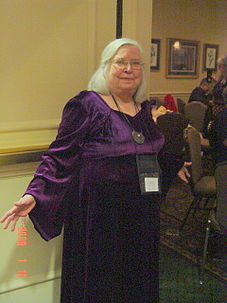 Juanita Coulson at GAFilk in 2009.

For three decades Juanita Coulson and her husband Buck co-edited Yandro, which won the Best Fanzine Hugo in 1965 and in the process made her just the second woman to win a fan Hugo. (The first was Elinor Busby, co-editor of Cry of the Nameless.)

Also a renowned filker, Juanita was inducted to the Filk Hall of Fame in 1996.

Juanita was named winner of the Big Heart Award at Chicon 7 in 2012.