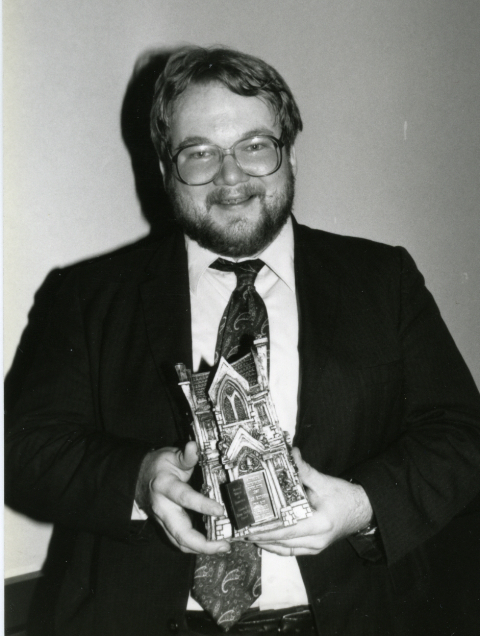 Alan Rodgers in 1987 with his Bram Stoker Award for “The Boy Who Came Back From the Dead.” Photo by and copyright © Andrew Porter.

Alan Rodgers’ Bone Music, out of print for almost 15 years, has returned as an ebook from Chameleon Publishers. Chameleon will be releasing Rodgers’ work monthly now. Coming next is a new edition of Fire, his apocalyptic novel that has been compared to The Stand.

Bone Music is an author’s edition, edited by Alan’s brother Scott Rodgers. The novel was widely admired when first published in 1995 — George Alec Effinger endorsed it saying, “The highest praise one writer can give another is to say ‘I wish I’d written that book…’”

A long time ago at the Crossroads, the great bluesman Robert Johnson sang “Judgment Day” and judgment did rain down upon the world. Now, a little girl named Lisa is the only hope for humanity’s redemption, but she and her mother Emma must face what happens when Lisa dies and comes back to life … again. Little Lisa and the greatest bluesmen of all time, from Leadbelly to Stevie Ray Vaughan, and even Dead Elvis, confront angels, demons, and voodoo powers before the ultimate showdown in the ultimate city of music, heaven and hell: New Orleans.

Rodgers also was known for works such as Pandora, Fire, Night, The Bear Who Found Christmas, Her Misbegotten Son, Alien Love, The River of Our Destiny, Angel of Our Mercy, and Light.