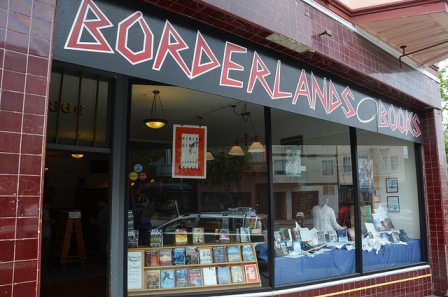 San Francisco’s Borderlands Books, a favorite of sf, fantasy and horror readers, is now reconsidering its plans to close. The store had announced at the beginning of the month it could not continue in business, an economic casualty of a new law raising the minimum wage in the city. However, strong support shown by customers may translate into enough funds to bridge the gap.

In November, San Francisco voters overwhelmingly passed a measure that will increase the minimum wage within the city to $15 per hour by 2018.  Although all of us at Borderlands support the concept of a living wage in principal and we believe that it’s possible that the new law will be good for San Francisco — Borderlands Books as it exists is not a financially viable business if subject to that minimum wage.  Consequently we will be closing our doors no later than March 31st.

What changed? Borderlands Books held a public meeting February 12 and, to the booksellers’ surprise, some workable ideas were brought forward. One is their newly announced plan to offer paid sponsorships of the store —

Each sponsorship will cost $100 for the year and will need to be renewed every year.  If we get 300 sponsors before March 31st, we will stay open for the remainder of 2015.

The Plan
Our goal is to gather enough paid sponsors to cover the projected short-fall in income that will be the result of the minimum wage increase in San Francisco.  At the beginning of next year we will again solicit sponsors.  If next year we again reach our goal by March 31st, we will remain open through 2016.  This process will continue each year until we close, either because of a lack of sponsorship or for other reasons.

That will be enough to cover their projected $25,000 shortfall, provide a cash reserve — and convince ownership the necessary level of support is really there.

If you’re down with The Plan (John Scalzi has already tweeted it to the four corners of the internet) here is how to sign up:

To pay in person, just come into the store anytime between noon and eight and inquire at the counter.  To pay by credit card, please call 415 824-8203 or toll-free at 888 893-4008 during the same hours (please be patient if you get a busy signal as we only have two phone lines).  To pay by check, please send the check to – Borderlands Books, Sponsorships, 866 Valencia St.  SF  CA 94110 and make sure to include your phone number, email address, and mailing address.

Other ideas Borderlands Books will pursue are: offering a monthly book subscription program; reaching out to local companies to see if they would be interested in hosting Google-style book talks; investigating the possibilities of starting a non-profit organization to help support either Borderlands specifically or San Francisco bookstores in general; and using the local political process to address some of the challenges facing smaller, local retailers.

[Thanks to Gregory Benford and D. Geordie Howe for the story.]

8 thoughts on “Borderlands Books Goes Under, Then Resurfaces”