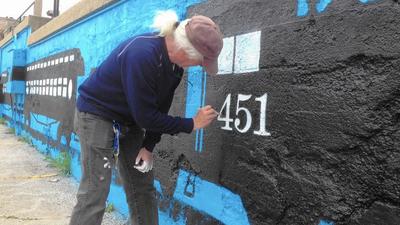 Pedersen said his work includes lots of trains, “but I had to have a design that was simple and would have an impact. I designed it so you could see what it was from 50 yards away.”

“It’s a universal image, everyone will recognize it’s a train,” Pedersen said. “I drew up the sketch and they liked it.”

Pedersen, who recently moved to Waukegan, said he enjoys the other murals around the city. He said he was walking down Sheridan Road when he noticed the wall and thought, “that would look a lot better with a mural.”

As a tribute to Waukegan author Ray Bradbury, Pedersen numbered the old engine 451 in honor of Bradbury’s book Fahrenheit 451.

Today we completed the final edit of the film! Next up is to get the score complete and then it should be ready to start entering in film festivals.

Bradbury, Ray. TWO-PAGE TLS TO DOLPH SHARP, DECEMBER 10, 1953.Dublin: S.i., 1953. Letter typed on both sides of a single 5″ x 7″ sheet of blue gray stock; 48 lines (approx.300 words); signed “Ray” (in ink) next to the author’s small self portrait. Folded once, with tiny staple holes at margins; Near Fine. Offered together with the original, roughly-opened mailing envelope.

A wonderful early and revealing letter from a young Ray Bradbury to Dolph Sharp, written from the Royal Hibernian Hotel in Dublin, Ireland and mailed shortly after from Paris, France. Sharp was an author and long-time friend of Bradbury’s who ran a writers group which met in his Hollywood Hills home. Sharp’s daughter E.E. King recalls that shortly after 1948, “Ray Bradbury, Sanora Babb, Wilma Shore, Joseph Petracca, Elliott Grennard and Ben Maddow convened at our home in the Hollywood Hills and shared their stories over pastrami on rye…for over 30 years, they came to Blair Drive…Gathering around the coffee table, they would read their works and comment on one another’s projects. There were drinks and smokes and laughter…always laughter. I remember hearing Ray read the drafts of The Halloween Tree, which started as a painting, then became a short story, then a screenplay and finally a novel. Ray loved words. He was drunk on language. For thirty years, these were always the best of times in our house” (see: http://inkubate.com/history-of-the-writer-as-a-young-girl-2/). Bradbury presses Sharp for details on any progress or successes regarding his work and that of his fellow group members; “There were so many good stories coming there for a time, one after another; certainly one of them must have sold!” He goes on to relay his own progress at writing the script for John Huston’s adaptation of Moby Dick (1956); “I’ve written some 150 pages in order to finished [sic] 77 pages of useable script…Huston seems very happy with the work. Gregory Peck is coming over next Sunday for a visit; he’ll be Ahab, you know. Leo Glenn will be Starbuck.” Perhaps the most revealing passage relates to Bradbury’s disappointment at the reception of his first novel, which was released just two months in advance of this letter: “Will look forward to your opinion on FAHRENHEIT 451 when you have the time. It didn’t make the splash I rather hoped it might. But then – things never do work out quite as planned. I’m damn lucky anyway.” A charming and intimate letter, rich in detail, to a significant individual in the author’s creative circle; scarce thus.           $1,950.00 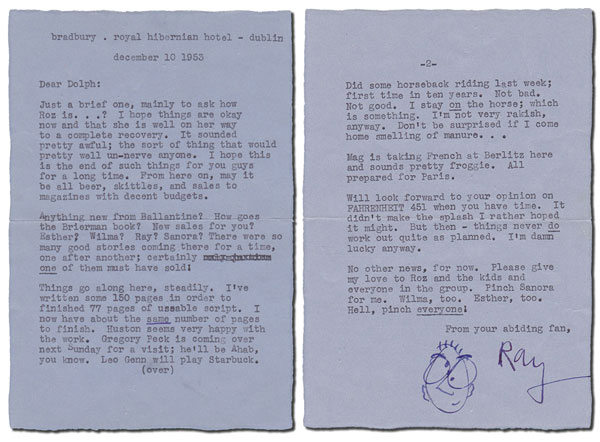 (5) THE BIG READ. In LA, The Big Read continues to celebrate the author of Fahrenheit 451. 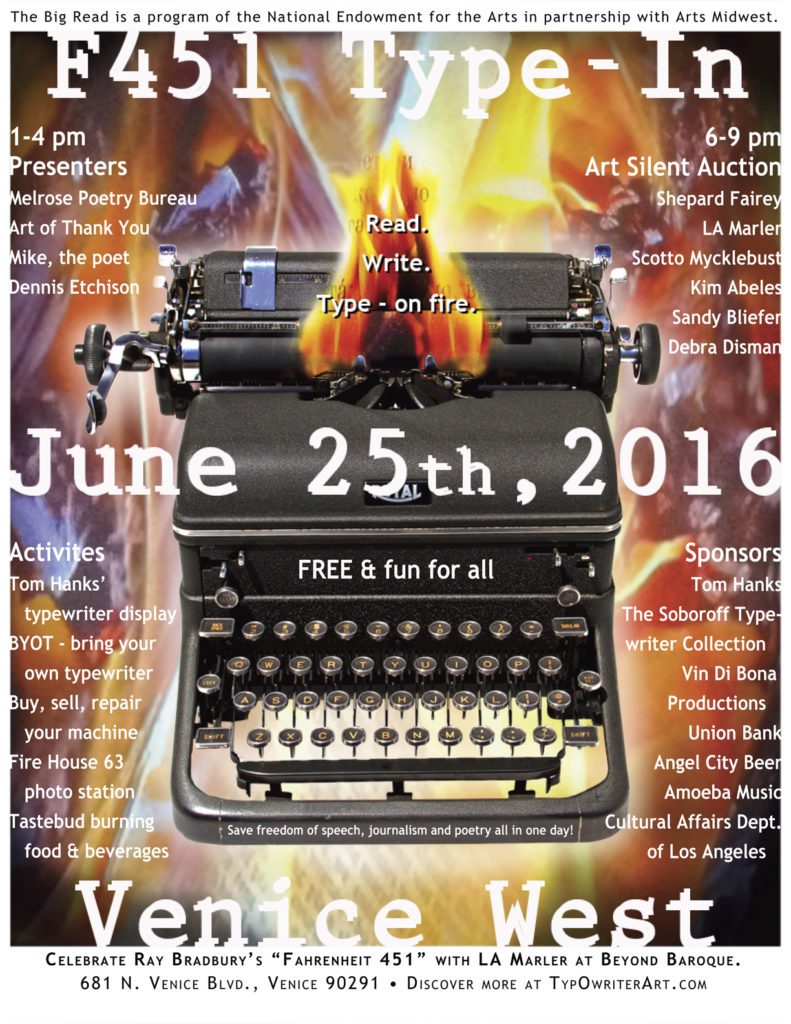 Community celebration of creative typewriting, the process employed by Ray Bradbury to write his science fiction masterpiece, Fahrenheit 451. Louise Marler in partnership with THE BIG READ LA brings the F451 Type-In to Beyond Baroque again. The Big Read is a program of the National Endowment for the Arts in partnership with Arts Midwest. With multi-disciplinary arts and activities involving typewriters, all are welcome to bring their own typewriter, use one provided, write interactive poem, type thank you letters, etc. The afternoon will be full of inspired Reading, Writing, and Typing.

A curated group of visual artists whose work centers on literature, language and typewriters will be on display simultaneously. In salute of the author’s work, Marler’s “Ray Bradbury TypOwriter” mixed media art is featured.

Bradbury’s 1947 Royal KMM typewriter art features a blazing writing machine surrounded by burnt text, inspired by “Fahrenheit 451.” This stunning work as well as the giclée limited-edition is offered for sale at the event with a portion of the sales being donated towards journalism scholarships through the Jim Murray Memorial Foundation.

Select Mexican students, inspired by reading “Fahrenheit 451,” artwork will be included with national and regional known artists. Free to all.

Screening of Ray Bradbury’s “The Wonderful Ice Cream Suit”, a Disney film, will be presented on Thursday, June 23 at 7:00 p.m. The Fantasy/Comedy/Drama stars Edward James Olmos, Joe Mantegna, Esai Morales, and Sid Caesar. Joe Mantegna will be on hand to introduce the film with his personal tribute to Ray Bradbury who helped start his professional acting career when he hired him for the theatrical version at the Organic Theatre in Chicago in 1974. Mantegna is currently the star of the popular, long-running CBS TV series “Criminal Minds.” Robert Kerr, from the Ray Bradbury Pandemonium Theatre Company, will offer his reflections of his experiences performing the play “The Wonderful Ice Cream Suit” at the Fremont Centre Theatre in South Pasadena with Bradbury in attendance. The Community Room, located at 1115 El Centro Street, will open at 6:30 p.m. The film is rated PG and is presented by the South Pasadena Public Library, the South Pasadena Arts Council (SPARC), and the Friends of the South Pasadena Public Library. Refreshments will be provided and no tickets or reservations are necessary. Special thanks to the Friends of the Rialto Theatre, David Marchan, John King Tarpinian, and David Lyons/Pro Outdoor Movies 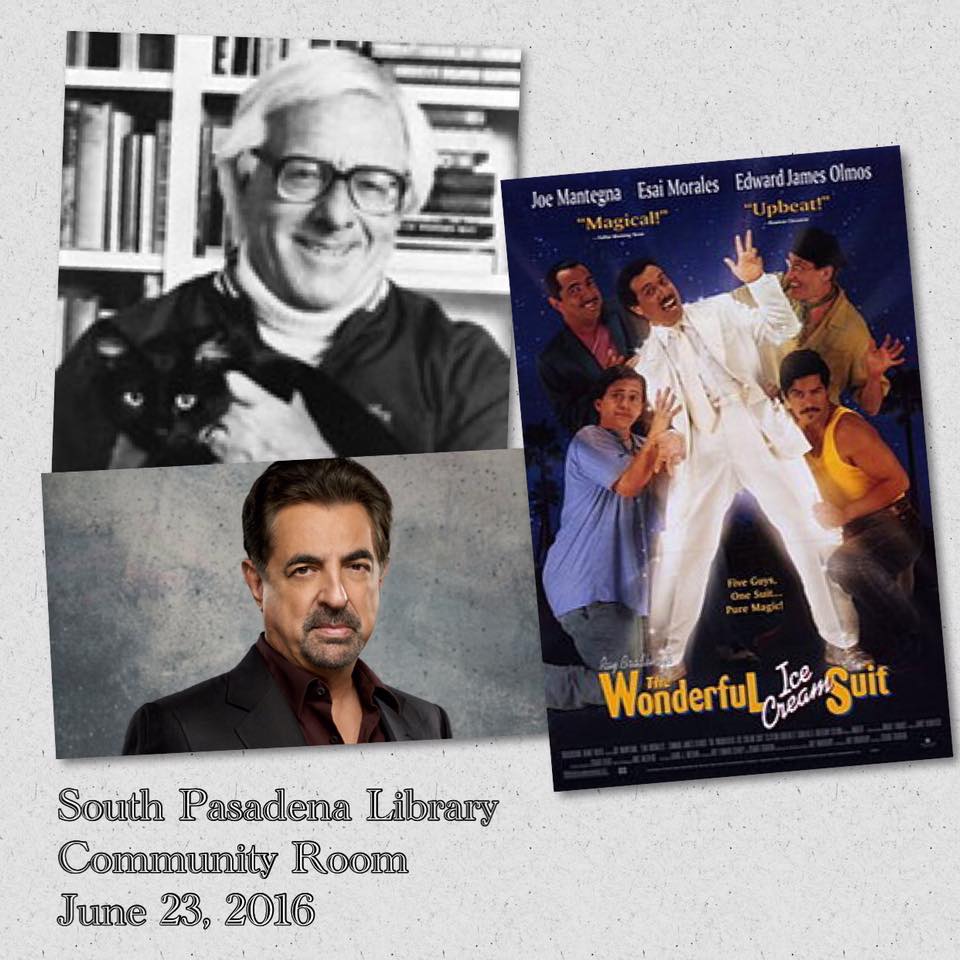 (7) THOSE WERE THE DAYS. In February 2010, Mystery & Imagination Bookshop hosted the Bleeding Edge Signing, and the notables present that day can be seen in this video.