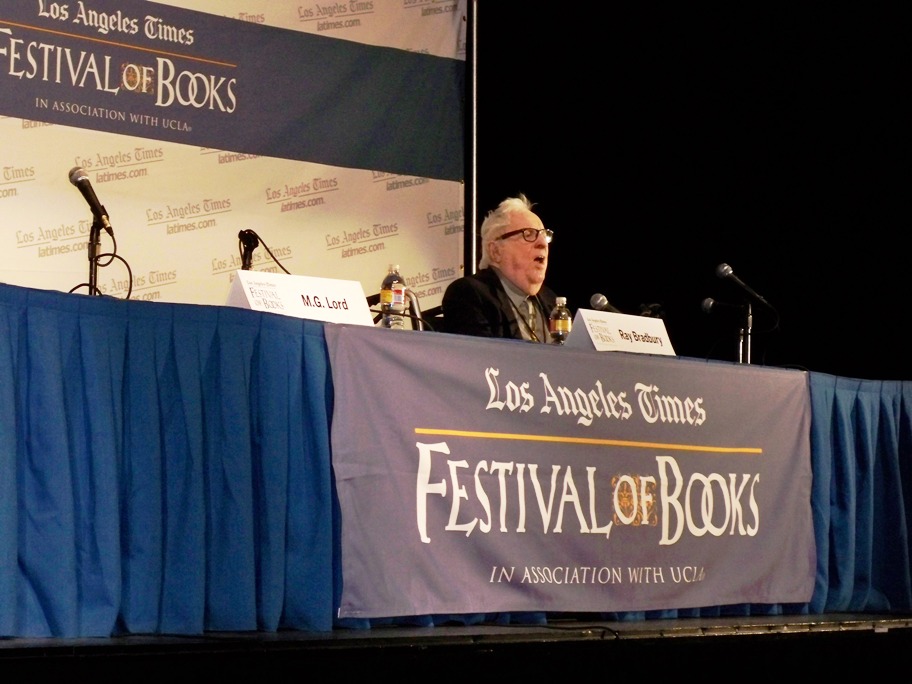 By John King Tarpinian: The crowds at the L. A. Times Festival of Books appeared to have been a little sparser than in recent years past but the spirit and enthusiasm of the crowd was a big as ever. My main focus was with assisting Ray Bradbury. Ray signed on Saturday at the Vagabond Books booth from 12:30 p.m. until 3:00 p.m. stopping only because the line never went away and UCLA security said his time was up.

Ray was then escorted by Cathy Brown, a UCLA Library Publicity, Events and Exhibits Coordinator, over to where the plaque was installed commemorating his having written Fahrenheit 451 in the basement of the Powell Library on the UCLA campus…using $9.80 of dimes. (The reason he calls himself a true “dime novelist.”) Anybody wishing to view the plaque can do so during normal library hours. It is down the east stairwell from the main rotunda and is outside room 60. The former typing room is now a research lab.

Mr. Bradbury then went over to the Ackerman Union Hall (no connection to his dear friend Forrest J Ackerman) to give his lecture. Ray had a surprise in store for the crowd after being introduced by M.G. Lord, who had the quote of the day: “We know that books burn at 451 degrees Fahrenheit, but at what temperature does a Kindle melt?” After Ms. Lord left the stage a Captain Beatty was invited onto the stage by Mr. Bradbury. Michael Prichard, a member of Ray’s Pandemonium Theatre Company came on stage dressed as the fire captain. Beatty gave his speech about the dumbing down of the people. Ray then equated this to newspapers in general and the L.A. Times specifically having gotten rid of their book review sections. Ray asked the crowd to let the Times know of their displeasure at the reduced emphasis of books. Only Ray Bradbury could have done this in such a venue while being recorded by C-SPAN’s BookTV.