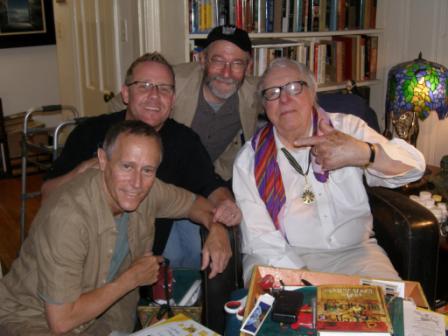 Sam Weller of Listen to the Echoes: The Ray Bradbury Interviews feels he has a pretty good handle on what Bradbury wanted in the way of a memorial – because he heard it from the author himself.

Weller goes public in an interview with Alex Shepard at Melville House.

How do you think Bradbury’s legacy should be honored and remembered? Should there be a museum? If so, is there a particular place you’d like to see a museum?

Steinbeck has a center. Charles Shultz has a museum. The houses of Scott Fitzgerald, Ernest Hemingway, William Faulkner, Laura Ingalls Wilder, Eudora Welty, Carson McCullers, Edgar Allan Poe and many others have been preserved, restored, and turned into museums. Bradbury should absolutely have a museum to honor him. His contributions to the canon—the way he shaped the literature of the fantastic—is irrefutable and absolute. Ray Bradbury was our mythologist. He wanted his house to be a museum. “Just keep everything where it is,” he often said to others and me. But from what I understand, the zoning in his neighborhood wouldn’t allow for it. It’s a very quiet residential area and you can’t have hordes of fans coming around all the time. It’s silly that the zoning will allow for houses that are more the size of a corporate office building in Dubai and not a museum, but C’est la vie.

But Ray was very clear to me what he wanted for his own legacy. The last time I saw him he insisted I look into purchasing his grandparents home at 619 W. Washington Street in Waukegan, Illinois. It is this house that he fictionalized in Dandelion Wine. If the proud yellow house on Cheviot Drive couldn’t be a museum, he wanted his grandparents home in Waukegan to be one. And I actually think there is another, perhaps even more obtainable museum option. The City of Waukegan has long owned the vacant Carnegie Library where Ray first fell in love with books, reading, and libraries. He based the library in Something Wicked This Way Comes on the Carnegie in Waukegan.

People have talked for years about restoring this library. It would be perfect for a Bradbury museum. Waukegan has been cultivating an arts corridor and a destination such as a Bradbury museum could and should fit prominently into this urban renewal. Instead, and it is noble, Waukegan is talking about erecting a statue to honor Ray, and that is very nice, but it doesn’t go far enough. And as long as I’m being candid, they have put together an advisory board to come up with ideas and not once have they reached out to me. I live 45 minutes away. I know exactly how Ray Bradbury wanted to be honored, yet the city has not called. This, coupled with the wrecking crew arriving at his L.A. house, has me feeling pretty frustrated and pissed. That’s why I’m speaking up.

In addition, late last year, Weller posted a four-part series about the little yellow house on his own website.

“The House On Cheviot Drive”

I love that house. I have always had an intense connection to places. Locations are where memories occur. And that house has a whole lot of memories. It makes me sad to think that one day soon, that old beautiful home so full of memories may no longer stand.

Ray Bradbury in his living room. Several of the shelves over his left shoulder contain first and foreign editions of his own books. The frame with the white matte contains an original acetate animation cel from Snow White and the Seven Dwarfs, given to Ray by Walt Disney himself.

Bradbury was a collector and had deep connections to his personal belongings because they represented memories.

Bradbury wanted to purchase a few of Mugnaini’s pieces, but realized he couldn’t afford them. So he contacted the artist and they started a friendship. Along the way, Bradbury paid for the pieces in installments. One of them was the 23” by 36.5” oil painting Modern Gothic. From this art gallery encounter, Ray Bradbury met his longtime artistic collaborator.

As I began this blog series about Ray Bradbury’s longtime residence, I suspected the worst may happen, and, indeed, it has…