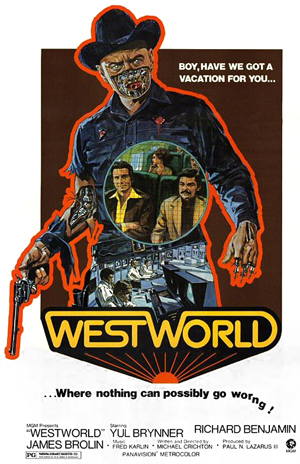 By Brandon Engel: Long before Will Smith and Kevin Kline took to the Old West as lawless steampunk gunslingers (and shortly after The Wild Wild West TV show’s initial run), Michael Crichton explored the technological-paradise-turned-nightmare theme in his first directorial outing, Westworld. In a futuristic “theme park” where the guns are real and all the girls are robots, the guests’ violent and lustful fantasies are indulged for a mere $1,000 a day. Richard Benjamin and James Brolin visit this adult vacation spot, called “Delos”, to live out their decadent dreams, until (of course), the robots revolt on their clientele and begin a bloody take down of the Disney-inspired Delos park.

Despite being the first film to employ digital image processing, a lot of the special effects are dated. But the film still excels as a terrifying thriller, capitalizing on real technophobic fears that have only intensified as our dependency on bionic beings increases. The robots of Delos are so lifelike that they act, talk, and bleed like people, and in the film they are (thankfully) all portrayed by real actors. The only part of them that reveals their mechanical nature is the hands. They are programmed to acquiesce to visitors of the park’s every desire, sexual or otherwise, and cannot harm them (despite having access to real bullets?) even as blood-thirsty guests choose to gun them down.  In the park there are three distinct “realms” – Romanworld, Medievalworld, and Westworld – each historically-themed and populated with the very-lifelike androids.

James Brolin’s character, a regular at Delos, takes his friend Peter (Richard Benjamin) to the park for a bachelor’s holiday following his nasty divorce. The two men get settled in at Westworld, preparing for a few days of fun at the robot bar and brothel. But as we soon find out, the park has been experiencing a few “technical difficulties” with its population of android slaves. The chief supervisor reports that the robots have been breaking down more than usual, and it appears that they’re transferring the problem from one to the other – just like a deadly virus. The scientists delay shutting down the park, choosing to observe the robot’s behavior. But their choice proves to be a serious mistake.

The androids rebel, not just by malfunctioning, but by taking matters into their own hands and murdering park guests. The viewer gets the sense that these sex/violence-bots have grown tired of being used and re-used as receptacles for human urges and appetites. Yul Brynner’s character, the toughest android gunslinger in Westworld, certainly evokes the feeling that these robotic beings are something more than just machines.

Brynner and his android man-in-black gunslinger character, clearly based on his depiction of “Chris” in The Magnificent Seven (1960) (which was itself a remake of Kurosawa’s Seven Samurai [1954]) gets viewer’s blood running cold in his relentless pursuit of Benjamin’s character. He portrays more than just a machine, beneath his steely eyes there is a chilling malevolence, a foreshadowing of Schwarzenegger’s fiendish machine in The Terminator (1984).

While the film may never enjoy the same adulation that the mainstream has bestowed upon Crichton’s more famous work, Jurassic Park, Westworld has retained its cult of fans — and it’s a cult that’s ever-increasing thanks to exposure through El Rey Network and the fact that various websites have made it available for streaming. It received mixed reviews upon its initial release in 1973. Critics responded saying the film was only “mildly entertaining”, whereas audiences were more enthusiastic, and today the film is considered a cynical 70’s classic in the vein of Bryan Forbes’ The Stepford Wives and Philip Kaufman’s Invasion of the Body Snatchers remake.

1 thought on “Brandon Engel: Westworld’s Delos Park, the Disneyland of Your Dreams…and Nightmares”