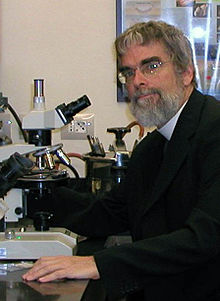 Brother Guy Consolmagno, the Vatican astronomer with many links to fandom, has been named by the American Astronomical Society’s Division for Planetary Sciences as the 2014 winner of the Carl Sagan Medal for outstanding communication by an active planetary scientists to the general public.

Br. Guy Consolmagno has a decades-long track record of communicating planetary science to the public while maintaining an active science career. In addition, he occupies a unique position within our profession as a credible spokesperson for scientific honesty within the context of religious belief. Br. Guy uses multiple media to reach his audience. He has authored or edited six books, with “Turn Right at Orion” in its fourth edition of publication. This book alone has had an enormous impact on the amateur astronomy community, engendering public support for astronomy. In addition to writing books, he is a dynamic popular speaker, giving 40 to 50 public lectures every year across both Europe and the United States, reaching thousands of people. He regularly gives interviews on BBC radio shows on planetary science topics and hosted his own BBC radio show discussing the origins of the universe (“A Brief History of the End of Everything”). These appearances address both pure science subjects and science-with-religion subjects. As a Jesuit Brother, Guy has become the voice of the juxtaposition of planetary science and astronomy with Christian belief, a rational spokesperson who can convey exceptionally well how religion and science can co-exist for believers.

Brother Guy has been a guest of honor at several science fiction conventions, including DucKon in 2000, ConFusion in 2002, Boskone in 2007, and ConClave in 2009.