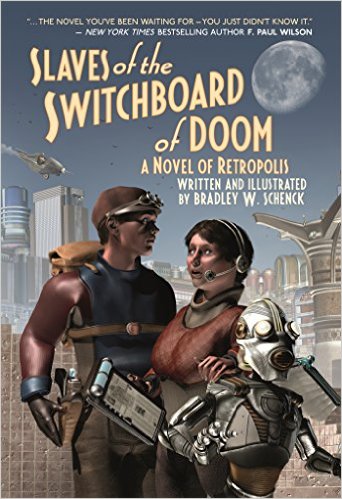 Slaves of the Switchboard of Doom

By Lis Carey: Retropolis is a city of the future as imagined in the first part of the 20th century. Robots walk the streets and work in many jobs that require physical abilities and machine precision that humans don’t have. They’re intelligent, and while they start out as indentured workers, they earn their full freedom over time, and have formed a pretty powerful union.

Meanwhile, humans do other work. Everyone relies on InfoSlates, which are a lot like our phones, except perhaps standardized more at the size of an iPad. That’s my impression of them, anyway. Another difference between InfoSlates and either iPads or phones is that they rely on human switchboard operators.

Nola Gardner is a switchboard operator, and she and her sister operators (remember, think 1930s rather than present day) abruptly find themselves out of jobs after a surprise efficiency review. What they can’t seem to find out is who replaced them.

Rusty is one of the aforementioned intelligent robots, who on his way home from work one day finds a female robot with no legs lying in the street. She doesn’t seem to talk, which is awkward, but he takes her back to his apartment, determined to find out where she belongs.

Nola persuades her coworkers to pool their severance pay and hire adventurer Dash Kent, who is also a plumber who lives in Rusty’s building. He’s got a great track record rescuing cats from the temple of a weird cult on Mars…

Soon an unexpected and unlikely group have formed to fight an unseen, devious enemy.

And all that is before the world’s tiniest giant robot shows up and starts wreaking havoc.

Don’t go looking for science-fictional plausibility here; that would be missing the point. This is an adventure in the 1939 World’s Fair’s future, not ours, and it’s a lot of fun.

(I received an advance reader’s copy of this book, and am reviewing it voluntarily.)

6 thoughts on “Carey – Slaves of the Switchboard of Doom Review”