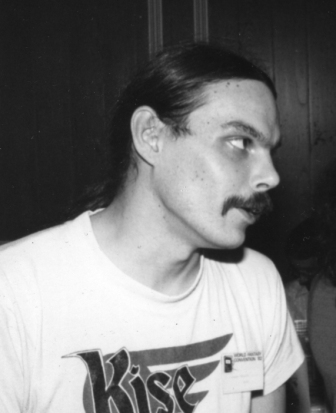 Chuck Miller at the 1982 World Fantasy Convention. Photo by and copyright © Andrew I. Porter

Chuck Miller, of Underwood-Miller, one of the top fantasy and science fiction small press publishers from the 1970s through the 1990s, passed away on May 24 from multiple organ failure.

Chuck, whose full name was Charles Franklin Miller II, was a fixture at East Coast science fiction conventions. His knowledge of science fiction, comics, and movies was unparalleled.

Miller and Tim Underwood founded the Underwood-Miller small press firm in 1976. Their first book was a hardcover edition of Jack Vance’s The Dying Earth (originally published in 1950). They would produce many other editions of Vance’s work, as well as several nonfiction anthologies about the work of Stephen King, and a five-volume edition of The Collected Stories of Philip K. Dick (1987). Their partnership ended in 1994.

Underwood-Miller was nominated for the World Fantasy Award in publishing five times, winning once in 1994, and Chuck Miller and Tim Underwood received a Milford Award for lifetime achievement in publishing that same year.

Chuck Miller and Tim Underwood’s Fear Itself: The Horror Fiction of Stephen King was a 1983 Hugo nominee for Best Nonfiction Book.

[Thanks to Annette Klause for the story.]