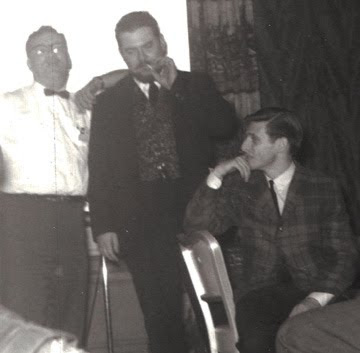 Isaac Asimov, Randall Garrett, and Harlan Ellison at the 1959 or 1960 Worldcon. Photo by Maggie Thompson.

In the 1970s I attended several conventions where Randall Garrett was on the program. I never personally interacted with him. Not even when I was co-chair of the 1978 Westercon, where we had to discourage Garrett from signing drinks to the convention’s master account. Somebody else got to bell that cat.

If I’d called him anything, it probably would have been “Sir” – he was an imposing figure. But I did hear a lot of other people refer to him as Randy in those days, which came to mind when I recently excerpted the Galactic Journey. I used “Randy Garrett” in the subhead, prompting this comment from Xtifr:

Note that Randall Garrett hated to be called “Randy”. Not that it really matters much at this point, but I still feel obliged to point it out.

I’d like to hear more about that. Because an awful lot of people who knew him did it.

Donald Westlake in an essay for Xero in 1960: “About a year ago, Henry Morrison asked Randy Garrett and me to speak at an ESFA meeting over in Jersey… And the last time I saw Randy Garrett (a week ago) he was working on a biography for decent money…”

Lin Carter in Beyond the Gates of Dream (1972): “Two blocks due west of where I lived was a mammoth residence hotel that the New York science fiction community called ‘Idiots’ Castle.’ Therein dwelt, at various times, Bob Silverberg, Randy Garrett, Harlan Ellison, Ron and Cindy Smith (then editing Inside, which had yet to win its fanzine Hugo) and other good people.”

Lawrence Block in Afterthoughts (2011): “He was a very interesting fellow, Randy Garrett…”

H. Beam Piper in a 1962 journal entry quoted in John Carr’s biography: “The next morning, ‘Met Fritz Leiber, Randy Garrett, Judy Merrill at breakfast and immediately became involved in a skit which was to be put on at the end of the convention.’”

Robert Silverberg, speaking at the 1968 Hugo Awards ceremony with Garrett in the audience: “I think it’s rather appropriate, in a way, that I am the one who’s filling in for Tony. For Tony, after all, is science fiction’s outstanding Catholic layman, and I, though I’m not Catholic, am recognized as the Pope by Randall Garrett. No, I’m quite, quite serious – no, Randy does recognize me as Pope. I’m probably the only Jewish boy who set out to become Pope, and ended up as President of the Science Fiction Writers of America. I recognize Randy, incidentally, as my Archbishop of Canterbury Designate.”

Mike Resnick in …Always a Fan, about Noreascon 4: “At 3:00 I moderated the panel that was the most fun of the con… hell, of the last half-dozen cons…. This included the stories of how John Campbell presided at his own funeral; how Ted Sturgeon and his wife, devout nudists, would invite couples over for dinner and greet them in the altogether; how Randy Garrett always stiffed worshipful new writers with huge dinner checks….”

Roger Ebert in a 1957 letter to a prozine: “I can’t understand how a fine writer like Randy Garrett can produce work like he does, then turn around and come up with that ‘Kyvor’ nonsense.”

Buck Coulson in Mimosa #11 (1993): “The con site was changed the next year, but I’ve been told that this was because Randy Garrett was surprised by the house detective in a compromising situation, there were blows exchanged, and the convention was invited to go somewhere else.”

Cory Seidman in her 1966 Worldcon report: “Yet a further refinement was the purchase of four pounds of black licorice jellybeans. One pound was left with Banquet Toast-master Isaac Asimov, in case Harlan got his Hugo. The remainder was divided into small packages and given to various people to be presented at intervals during the weekend. Even Boston’s own mild-mannered Hal Clement/Harry C. Stubbs is said to have sidled up to Ellison, muttering, ‘I believe these are yours.’ Now, the one kind of jellybeans that Harlan Ellison does not like happens to be black licorice. So if he had been bugged out of his mind before, now he was pretty well bugged out of the known universe. Which raised his innate aptitude for Randy Garrett-insulting to a new peak and provided much amusement for the assembled spectators.”

Philip Jose Farmer in an interview: “No, that’s the one I did with Randy Garrett, ‘The Ballad of Hillary Boon.’”

Maggie Thompson in 2010 remembering a panel at the 1959 or 1960 Worldcon: “In any case, I was sitting a couple of rows back at a panel in which the entertainment consisted simply of (left to right) Isaac Asimov, Randy Garrett, and Harlan exchanging banter until the panel was over.”

Harlan Ellison in the Introduction to Again, Dangerous Visions (1971): “Randy Garrett isn’t here because, though he called one frantic November night and tried to hype me into sending him an advance against a story he would write, he never submitted a manuscript.”

He even used the name himself at times — Progress Report #1 of the 1957 Worldcon shows “Randy Garrett” is the name he used when he bought his membership.