Hal Niedzviecki, now the former editor of Write, quarterly magazine of the Writers’ Union of Canada, started a row when he said he did not believe in cultural appropriation. Prefacing an issue focused on the work of Indigenous authors he said:

In my opinion, anyone, anywhere, should be encouraged to imagine other peoples, other cultures, other identities… I’d go so far as to say there should even be an award for doing so – the Appropriation prize for best book by an author who writes about people who aren’t even remotely like her or him.

He argued this would help Canadian literature shed its “exhaustingly white and middle class” identity.

Get outside your own head. Relentlessly explore the lives of people who aren’t like you, who you didn’t grow up with, who don’t share your background, bank balance and expectations. Set your sights on the big goal: win the Appropriation prize.

His editorial set off an uproar: he was criticized by some of the issue’s Indigenous contributors, pilloried in social media, and repudiated by the Writers’ Union in an apology for the “pain and offense” caused by his article. Niedzviecki also apologized and resigned as editor.

However, it did not end there.

The editor of the magazine subsequently resigned and the conversation turned inevitably towards Internet mobbing and freedom of speech, in the very adult form of ‘I’ll write about Indigenous people if I want to!’

Which I expected and which, I must admit, did not bother me terribly since it is the kind of thing I hear constantly.

But then in a case of ‘hold my beer,’ yesterday, members of Canada’s writing and publishing community, people who work for such ‘Canadian’ institutions as Macleans, started to organize online to create an Appropriation Award.

We will call it the Atuk Prize in honor of Mordecai Richler's The Incomparable Atuk. Come on. We get 1500 more & I'll organize it #cdnmedia

And in no time a flock of Canadian editors and writers who’d been looking for permission to push back against Niedzviecki’s critics began to pledge money toward the award. 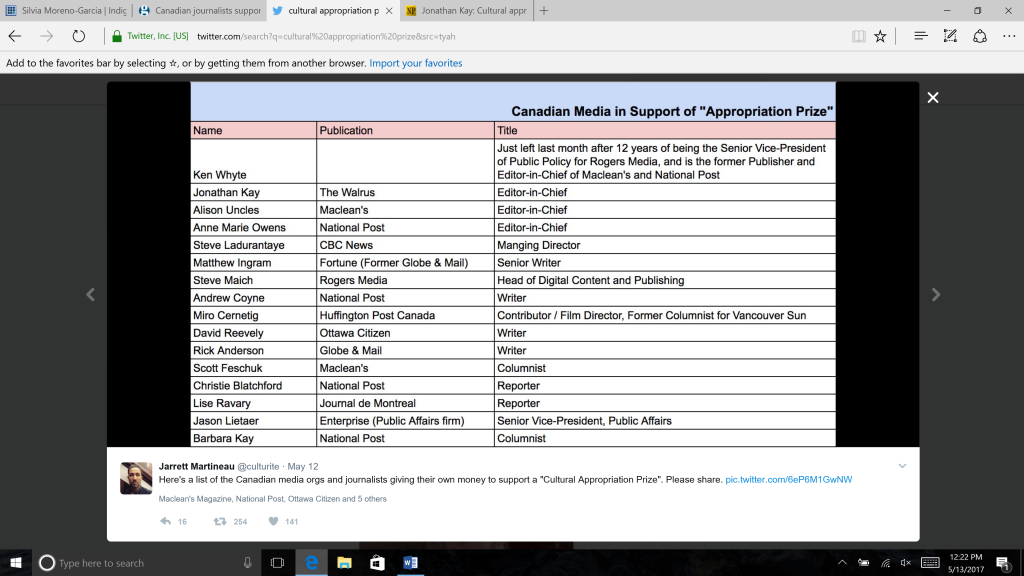 Yes. This is the petty thing that the Canadian community came together to create, offering in the end more than $3,000 for a crass award. This is the equivalent of someone, in the midst of a discussion about women in the arts, jumping in to create the Manly Man Literary Award.

I will be candid: I cried. And I don’t cry often. Up until that point the whole thing seemed to me an odd, if amusing situation which would be resolved positively (I can be naive). After that, I have been left feeling like the Canadian literary community is a cold, callous and indifferent sphere to which I do not wish to belong.

I have felt hopeless. I do not know what to do, not for myself, but for young Indigenous writers who may be looking at this and dropping their pens, deleting their Word document, and giving up on the whole artistic creation thing.

She decided one way would be to answer with a positive award which encourages Indigenous writers. She offered the first contribution of prize money, and began asking how to find an administering organization.

I said online I would pony up $500 for the creation of an Emerging Indigenous Voices Award and I am actually serious about that, though I have no idea which would be the best organization to run with this.

I have always told people that Canada is a good country because it aims to be better, even when mistakes are made. Yesterday, the Canadian literature scene proved me wrong.

However, rather than discuss the editorial or the formation of that gross award, I want to focus on Indigenous writers, on marginalized writers. Please, contact me, tell me how we can do some good and build something beautiful together. Surely we can and do not need #CanadaLit for that.

In an update to her post, Moreno-Garcia said she’d already received $2,500 in pledges, and contacts from people offering to give if a GoFundMe appeal was launched.