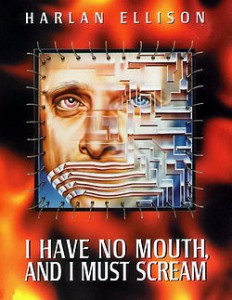 The 1995 video game based on the Harlan Ellison short story I Have No Mouth and I Must Scream is back in circulation, rereleased by GOG.

When it originally appeared the game won many awards including “Best Dark Game of 1996” from Digital Hollywood and “Best Game Adapted from Linear Media” from the Computer Game Developers Conference. Computer Gaming World was effusive, naming it “Adventure Game of the Year” and listing it as one of the “150 Games of All Time,” “Best 15 Sleepers of All Time” and “Best 15 Endings of All Time.”

I Have No Mouth and I Must Scream languished because Ellison sued original developer Cyberdreams when he believed he wasn’t getting his share of the profits. Now it has been brought back to life by Night Dive Studios under license from the author. Night Dive specializes in reviving classic, abandoned and forgotten PC games.

Set in a post-apocalyptic future where humanity has been destroyed, an all powerful artificial intelligence named AM holds five people prisoner, granting them immortality so it can torture them over and over again until the end of time. The game itself takes place across five chapters, one for each character, where the player guides them through scenarios created by AM. By overcoming their personal psychosis they’re able to take steps closer toward finally defeating their tormentor. The player’s primary role is to solve puzzles and make decisions that can affect how the final confrontation with AM plays out.

Ellison performs the voice of the omnipotent computer AM. A fully-detailed account of play is in the Wikipedia.

Predictably, the new release has been stalked by digital pirates. Ellison responded to one report with a warning shot over the bow of the internet —

I, as President of The Kilimanjaro Corporation, and as “Author” employee of TKC, own all rights in the videogame I HAVE NO MOUTH & I MUST SCREAM. And only recently have TKC and myself, Harlan Ellison, licensed a reissue and update of the product to Stephen Kick of Night Dive Studios. My proprietorship is alive and roundhouse kicking. So if any of the gamesters you (gawd bless’ya, baby) ratted out think they can play fast’n’loose with the artifact of my Creativity, advise them that even though the original manufacturers, Cyberdreams, booked and ran off with the profits, I sued them, won, own all the remainder stock, and the copyright is in my and TKC’s name, all rights reserved. Even a perfunctory, due-diligence, only-thieves-&-morons-won’t-do-it search of public and/or Library of Congress records will attest to the foregoing. So pirates, no matter how young, how naive, how lamebrained, how arrogant, who pilfer from me, will be doing so knowing aforehand that I take no prisoners and I will pursue their effrontery to the grave. Not mine…theirs.