By James H. Burns: There has been an abundance of shows trying to take on the success of Pawn Stars and American Pickers, the series where essentially folks can turn their collectables to cash, and in the case of the latter, we see collectables dealers scouring the nation for values…  (I suppose it all goes back to PBS’ Antiques Road Show.)

But never, until now, has one of the hosts of these shows been someone many of us have known for decades, someone who’s been around science fiction conventions, in fact, since he was a kid. 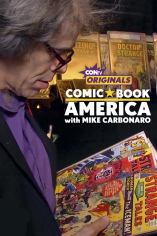 Michael Carbonaro popped up on the New York scene in the early 1970s, when he was a teen, as a comic book dealer. He wound up owning one of the first comics shops in America, and decades later, took over the mantle of the New York comic book conventions, producing the Big Apple Comic Convention, in Manhattan, for the last twenty years.

They have a whole bunch of programming of genre interest, and if you look for the icon that says you don’t mind watching commercials, it’s FREE.

(And no, do not get this confused with the magician of the same name, who has a rather popular reality series, on TruTV cable…  It’s never quite fair, when someone comes along, with the same monicker!)

Mike’s show has four short episodes now, and the best is probably with the Dr. Strange collector, who even has a full replica costume of the Master of the Mystic Arts.

And, there will be more to come!