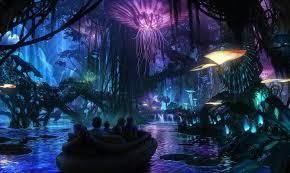 The Avatar-themed Disney World attraction first announced in 2011 began construction this month, part of an estimated $800 million renovation and expansion of the park’s Animal Kingdom.

Animal Kingdom is home to three of Disney World’s 10 highest-rated attractions: Expedition Everest, Kilimanjaro Safaris and Festival of the Lion King. The Themed Entertainment Association says Animal Kingdom already outdraws Disney’s Hollywood Studios and Universal’s Harry Potter-powered Islands of Adventure. What Disney is really looking for is to elevate Animal Kingdom into a full-day destination. According to the Sentinel:

The park’s struggle to keep guests for a full day has become a hard-to-ignore flaw because it has exacerbated overcrowding problems elsewhere at Disney World. Many of the visitors checking out of Animal Kingdom in midafternoon head for the Magic Kingdom, which is bursting with more than 17 million annual visitors, or the Downtown Disney retail area, which struggles with parking shortages in the evenings.

It’s hoped the luminescent night-time environment shown in Avatar will translate to something that keeps tourists in Animal Kingdom after dark.

The Avatar area will open in 2017, replete with floating mountains, lush jungle scenery and a ride on a “banshee,” the flying predator seen in the movie.

[Thanks to Petréa Mitchell for the story.]