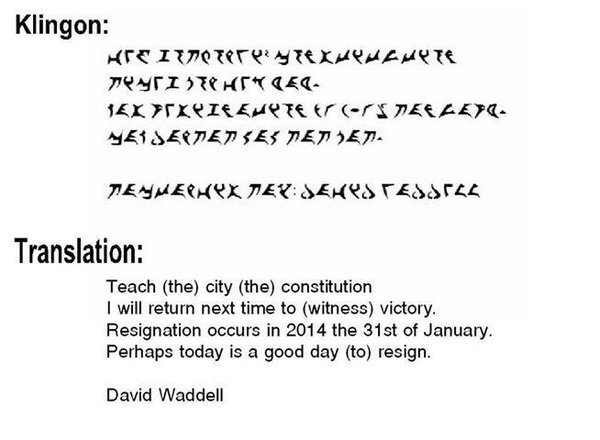 Klingon is the language of diplomacy and commerce in the more unfortunate reaches of the universe, an area not previously suspected to encompass Indian Trail, North Carolina. But when David Waddell wanted to tell the mayor he was resigning as a city councilman he wrote the message in Klingon.

According to Waddell, Mayor Alvarez is “a little bit of a Trekkie, also,” so he considered this a good way to zap him on the way out.

Indian Trail is about 15 miles southeast of Charlotte. Waddell said he quit because of long-simmering clashes with the town manager and frustration with what he called cronyism and secrecy.

“Today is a good day to resign!” he wrote – actually more of a reference to Little Big Man than Star Trek. Though in the words of another famous figure, this is not the beginning of the end but the end of the beginning as Waddell sees it. He plans to run as a write-in candidate on the Constitution Party platform for the seat of Democratic Senator Kay Hagan this year.

“I’m going to challenge the two-party system and challenge the common way of thinking on a lot of political issues,” Waddell promised.

Hmm. Better tell the Captain to warm up the phasers and dust off the photon torpedoes.

Four people sent me links about this in one day – readers know a story that’s in my wheelhouse when they see one.  If I hadn’t been felled with a heavy cold I’d have written about it sooner. And I still have a few more things to work on before I’m caught up.

5 thoughts on “Councilman Resigns in Klingon”