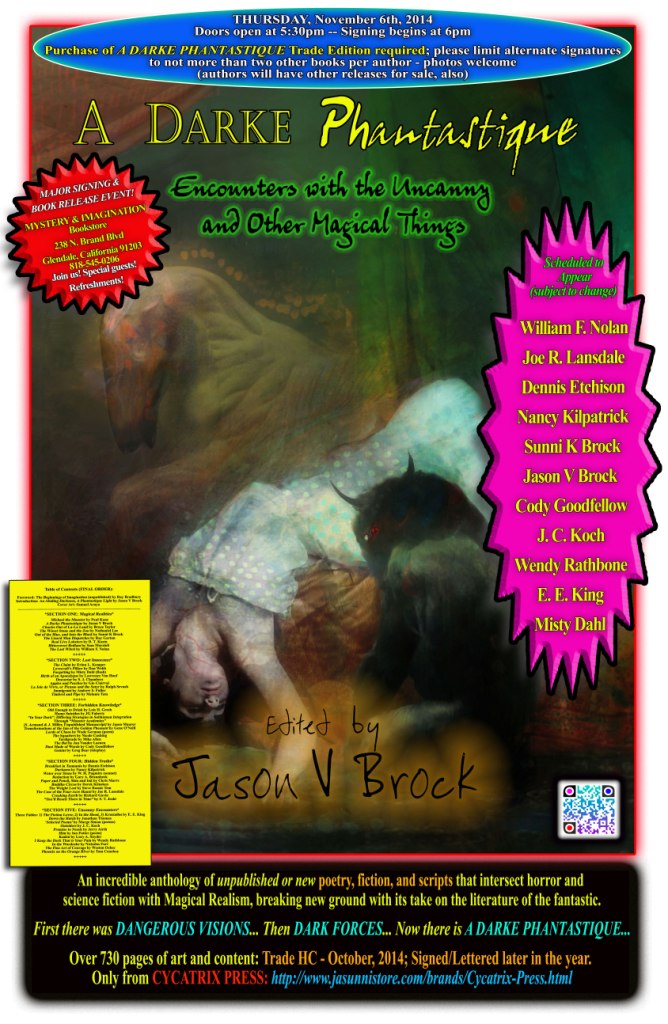 Darke Phantastique: Encounters with the Uncanny and Other Magical Things

*SECTION ONE: Magical Realities*
Michael the Monster by Paul Kane
A Darke Phantastique by Jason V Brock
Charles Out of La-La Land by Bruce Taylor
The Wisest Stone and the Zoo by Nathaniel Lee
Out of the Blue, and Into the Black by Sunni K Brock
Lizard Man Dispatches by Ray Garton
Real Live Lobsters by D. T. Kastn
Bittersweet Bedlam by Samuel Marzioli
The Last Witch by William F. Nolan

*SECTION FIVE: Uncanny Encounters*
Three Fables: 1) In the Hood, 2) Krustallos, 3) The Fiction Lover by E. E. King
Down the Hatch by Jonathan Thomas
‘Selected Poems’ by Marge Simon (poems)
Outsiders by J. C. Koch
Promise to Nessie by Jerry Airth
Him by Ian Futter (poem)
Kudzu by Lucy A. Snyder
I Keep the Dark That is Your Pain by Wendy Rathbone
In the Wardrobe by Nickolas Furr
The Fine Art of Courage by Weston Ochse
Phoenix on the Orange River by Tom Conoboy