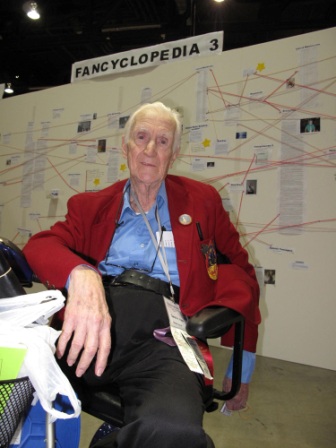 The legendary Dave Kyle is 96 today, February 14. Going by his Facebook photo, he spent it wrapped up in a cozy blanket in front of the fireplace, a warm drink within reach.

Coincidentally, this is also the day Rich Lynch has posted an electronic copy of Mimosa 7, one of the early issues that’s been missing from the online collection. Dave Kyle’s contribution to the issue, “A Hugo Gernsback Author”, outlines his discovery of fandom and ardent desire to make his first pro sale.

Lynch touts the other delights of Mimosa 7 with these well-chosen words:

Sharon Farber has an article in the issue, the third in her long series of anecdotal tales from her medical student days. And we also included an article by Paul “Skel” Skelton (titled “No Way to Stand Kansas”) about how he thought fanzine fandom was beginning to transition into an inconsequential adjunct of “social fandom”.

The featured article of the issue, though, is also the longest article in the entire 30-issue run of Mimosa — a description and history of Chat, the fanzine that Nicki and I published before we began Mimosa. Embedded within that article are short pieces by Bob Tucker and Teddy Harvia, and an amusing and anecdotal three way interview with Bob Tucker and Robert Bloch.

And I can’t end the description of Mimosa 7 without mentioning that it includes one of the longest lettercols in the run, with correspondence from 28 different letterhacks including such notables as Harry Warner, Walt Willis, Sam Moskowitz, Russell Chauvenet, A. Langley Searles, Buck Coulson, Juanita Coulson, and Mike Glicksohn. Covers are by Teddy Harvia and Peggy Ranson.