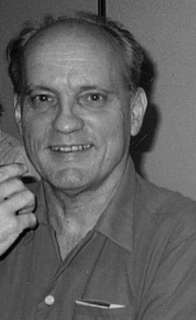 Bruce Gillespie calls Lake’s novels and short stories “an important part of the Australian SF surge in the 1970s and early 1980s.”

Lake also wrote for fanzines, including Gillespie’s Science Fiction Commentary, which published a chapter of his autobiography.

I’m very sorry to tell you that David passed away from a lung infection last Sunday afternoon. He was in the hospital for two weeks and was simply not responding to treatment.

He had a period of initial discomfort because of the mucous build-up in his chest and the oxygen mask. But they gave him morphine and his passing was peaceful.

In a way, it was the best outcome. I think they were going to put him in a nursing home if he recovered – which would have been absolutely horrible for him. He was so weak, the next flu that came along would have knocked him over, and he would have to endure it all over again. He went out on his own terms – he was adamant he would live in his house as long as he could. Even so, we will all miss him.

Until he retired, Lake was a Senior Lecturer in English at the University of Queensland. Born in British India in 1929, he moved to Australia in 1975.

[Thanks to Bruce Gillespie and Andrew Porter for the story.]