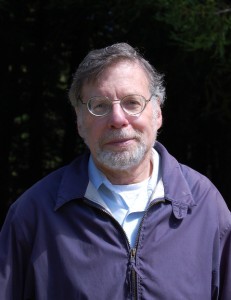 Mike Deckinger, a longtime fanzine fan, died at home in San Francisco on February 12, 2012 but his death went unreported within fandom until today when Robert Lichtman received back the latest mailing of Trap Door marked “deceased.”

A notice in the San Francisco Chronicle last February read:

Michael Deckinger Passed away peacefully at home on 02/02/12. Mike died as quietly as he lived. Sandi, his wife of 47 years, Eric and Merrill, his brothers, and his many friends from work, the neighborhood, and the science fiction world will miss him. His unique sense of humor will be missed by many. Mike’s cat companions added joy to his life for many years. Mike didn’t like a fuss and hated crowds, for this reason, a private memorial service is planned at a future date. In remembrance of Mike’s life, donations can be made to the San Francisco SPCA, 2500 16th St, San Francisco, CA 94103.

Mike came into fandom in the 1950s. He was a member of the Eastern Science Fiction Association (ESFA) from then until he moved to the West Coast in 1971. Most of that time EFSA met in Newark, where Mike lived seven years beginning in 1964. He served a term as director which came with the responsibility of finding speakers for the evening’s program. Among the guest speakers he recruited were Samuel Delany (a “beardless youth, just out of his teens”) and Joanna Russ.

Mike got active in fanzines at the same time — he cited the Coulsons’ Yandro as the first fanzine he ever received – and became a sufficiently notable faneditor that Roger Ebert paid him respect in a well-known reminiscence called “Thought Experiments: How Propeller-heads, BNFs, Sercon Geeks, Newbies, Recovering GAFIATors, and Kids in Basements Invented the World Wide Web, all Except the Delivery System” (available at Asimov’s):

During the past decade Deckinger wrote two autobiographical articles for Earl Kemp’s eI, one about his days in ESFA, and another, “How I Almost Became Ivar Jorgensen”, recalling when he almost became a pseudonymous collaborator with pulp writer and editor Paul W. Fairman, who lived half a block away.

Mike is survived by his wife, Sandy (spelled this way in the Wikipedia). Her own fannish credits include a contribution to the original issue of Spockanalia, the first all-Star Trek fanzine, published when the series was still in its first season on NBC. 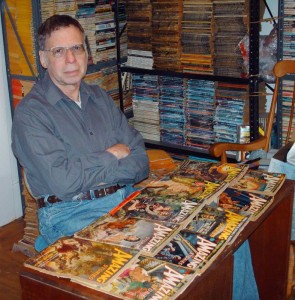 Mike Deckinger with part of his pulp magazine collection.

[Thanks to Robert Lichtman and Andrew Porter for the story.]