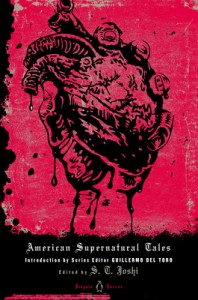 The collection, which first appeared in 2007, is projected as part of a six-volume series of the best in classic horror curated by Guillermo del Toro.

Included here are some of del Toro’s favorites, from Mary Shelley’s Frankenstein and Ray Russell’s short story “Sardonicus,” considered by Stephen King to be “perhaps the finest example of the modern Gothic ever written,” to Shirley Jackson’s The Haunting of Hill House and stories by Ray Bradbury, Joyce Carol Oates, Ted Klein, and Robert E. Howard.

The series is due in September. The other titles are: