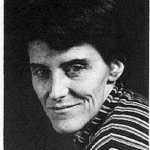 Let’s make Kathryn McLean [sic] a Grand Master of Science Fiction. She is in her 90’s and the award can only go to a living writer!

It is the renewal of a plea he made in 2013 when his own selection as a Grand Master was announced.

Damon Knight wrote, “As a science fiction writer she has few peers; her work is not only technically brilliant but has a rare human warmth and richness.”[1] Brian Aldiss noted [citation needed] that she could “do the hard stuff magnificently,” while Theodore Sturgeon observed [citation needed] that she “generally starts from a base of hard science, or rationalizes psi phenomena with beautifully finished logic.”

The full title of the SFWA honor being the Damon Knight Memorial Grand Master Award, Knight’s accolade should count for even more.

Since it is not about quantity, but quality and influence, that is why the award should be given her. As I wrote to her when I the award was announced for me:

“Among the great absurdities of the SF world is that I am a grand master and you are not. Happy birthday and much love.” By not honoring her, we make our awards mean less. Her single collection of short stories (The Diploids) and her Nebula Award winning novel [sic] (Missing Man) pointed a new generation of writers the way sentences had to be put together to tell a story both humanly and intellectually satisfying, and an older generation recognized it.

MacLean’s novella “The Missing Man” won a Nebula Award in 1971. The expanded novel-length version was nominated for a Nebula in 1976. In 2003 MacLean was honored as an SFWA Author Emeritus. In 2011, she received the Cordwainer Smith Rediscovery Award.

[Thanks to Brian Z. for the story.]