By David K.M. Klaus: I found Murdoch Mysteries by following disparate links, always one of the great things about the Web.  It looks like great fun.

Seasons 1-6 are on Hulu, 1-7 on Netflix, and 1-8 on Amazon, and I suspect you have at least one of those services; also on DVD and Blu-ray, and there are connected webisodes, in which the viewer is invited to solve the case through clues in each one.  This Wikipedia page includes Canadian availability since it is a Canadian show, with Australian, British, and even French availability.

There is a definite science-fictional element as this is set at the turn of the 19th-20th Centuries, yet Murdoch invents prototypes for cases or foresees more modern devices using the technology of the time — sonar, microwave ovens, airships, bit-mapped graphics using a letter-number coordinate color code on a telegraph to send a fax, Silly-Putty (!), even the game Clue.

There’s a subplot in which one character, a police constable, spends an entire season trying to write a fantasy novel.  There are two cross-overs with future (that is, now) detective shows through two different means.

There have been many guest stars who have been in sf genre shows such as Colm Meany, Victor Garber, Trenna Keating, Aaron Ashmore, Samantha Bond, David Hewlett, Robbie Arnell, etc.

It hasn’t had Benedict Cumberbatch, Julian Glover, William B. Davis, Adam Baldwin, Alan Tudyk, or Jewel Staite, but if the show is on long enough, they will be inevitable because the show will be running out of actors.

It has had Canadian fan Yvonne Penney, who won a walk-on role and appeared in two episodes. 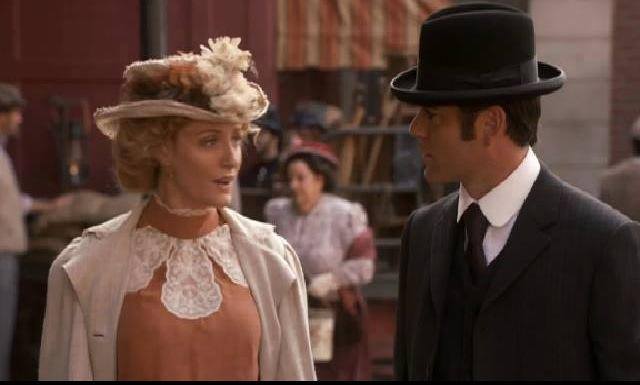 Yvonne is in the background between Julia and William (pink hat).

If you already know all of this, sorry, it’s just that even though it’s been Emmy-nominated in the U. S., I never heard of it before and I’m looking forward to watching it.