By Diana Pavlac Glyer: I found out today that my book Bandersnatch: C.S. Lewis, J.R.R. Tolkien, and the Creative Collaboration of the Inklings is listed on http://hugonoms2015.wikia.com/ as a possible nominee for a 2015 Hugo Award. I am deeply touched that people have noticed the book and commended it. There’s been a lot of controversy swirling around the Hugos in recent years, but my roots in fandom go way back, and this award means the world to me. 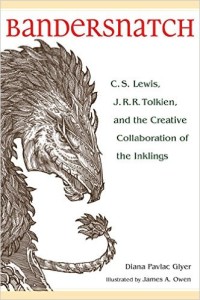 The problem is that I don’t think that Bandersnatch is eligible until next year. The book has a 2016 copyright date. The beautiful illustrations by James Artimus Owen are also copyright 2016. Kent State University Press considers Bandersnatch to be part of its Winter Catalog, which means the book was not released to their distributors until mid-January 2016. Copies did not become generally available until that time.

The complicating factor is that Amazon lists December 2015 as the official release date. But Amazon didn’t actually ship books until January 2016.

I know that these things aren’t as straightforward as they appear. Like a lot of things, it’s complicated. But here’s my take on it: the book has a 2016 copyright and WorldCat identifies it as a 2016 title. I hope it will be a contender in the next voting cycle.