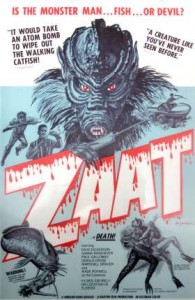 Don Barton, director of the cult monster film Zaat, has died at the age of 83. His 1971 movie about a 7-foot-tall giant radioactive walking catfish gained fresh notoriety after being mocked on Mystery Science Theatre 3000 in 1999, making a brief return to theaters in 2001 and appearing twice on Turner Classic Movies.

Barton co-founded the Florida Motion Picture and Television Association and won several awards for documentaries. He worked as vice president of marketing at what’s now St. Vincent’s HealthCare, and later served on the hospital’s executive board.