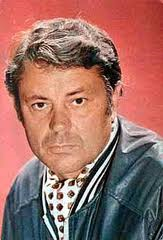 Actor Donatas Banionis, who appeared in more than 70 films and is best known in the West for starring in Andrei Tarkovsky’s Solaris, died September 4 at the age of 90.

In 2013, he was honored with the Lithuanian National Prize for his contribution to the arts.

Apart from his acting, Banionis’ other claim to fame (or infamy) is that his performance in the Soviet spy movie Dead Season (1968) was the reason Vladimir Putin joined the KGB. According to the Daily Beast —

When Banionis met Putin at the Kremlin, the actor asked if it was true that his character influenced his choice of profession. Putin laughed and said, ‘Yes, I suppose you can say that.’

[Thanks to Gary Farber for the story.]