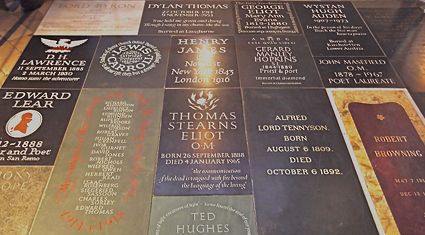 Since reporting that a C. S. Lewis memorial will be added to Poets’ Corner in Westminster Abbey this coming November 22, I’ve learned they need to raise £20,000 to make it happen.

The C. S. Lewis in Poets’ Corner site explains, “The Dean of Westminster has kindly given his permission for this memorial, but the Abbey itself does not finance such projects, and so we invite your support.”

Lending their names to the appeal are Dr. Michael Ward, author of Planet Narnia and The Narnia Code, Professor Helen Cooper, Professor of Medieval and Renaissance English, University of Cambridge (the professorial Chair which Lewis held, 1955-1963), Jason Lepojärvi, President of the Oxford University C.S. Lewis Society, Professor Alister McGrath, author of C.S. Lewis, A Life, Michael Ramsden, Director of the Oxford Centre for Christian Apologetics, and Dr. Judith Wolfe, co-editor of C.S. Lewis and the Church and General Editor of The Journal of Inklings Studies.