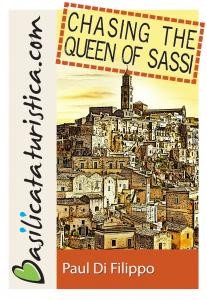 Chasing The Queen of Sassi by Paul Di Filippo was written after an inspiring visit to the Subterranean City of Matera, Italy – a World Heritage Site known for its ancient cave houses.

After his wife’s death, Rupert decides to change his life…. He wants to see Matera again, and ends up loving it so much that he decides to move there. But the city is mysterious: who is the beautiful Daeria Bruno that appears and disappears without a trace? And how will the cucibocca’s curse affect his life? In a dizzying series of time travels, Rupert will reveal legendary secrets, being at the center of a timeless story.

Now available as a free download for the Nook or the Kindle.