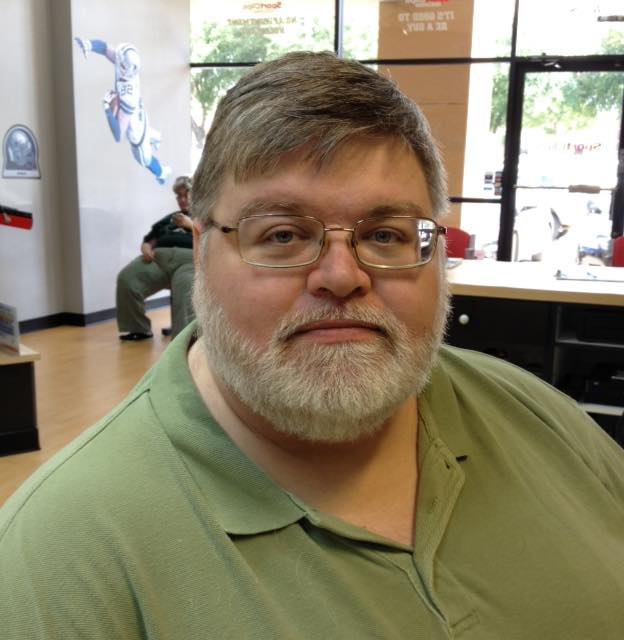 When Eddy didn’t show up for an event, his longtime girlfriend Robyn went to his hotel room and found him unresponsive. He was rushed to the hospital where the medical staff worked on him for about 45 minutes but were unable to resuscitate him. The doctor said he died peacefully and painlessly.

Dravecky, a nationally-known conrunner, also co-founded FenCon in Dallas in 2004. He served as the event’s communications director and webmaster from the beginning.

He helped handle social media for LoneStarCon 3, the 2013 Worldcon in San Antonio, and was a past board member of its parent group, ALAMO, a Texas nonprofit corporation that has organized many major conventions.

Dravecky was a past president and held other offices in ORAC, the “Organized Rebel Adventurers Club” of Dallas/Ft. Worth.

His particular interests as a fan were MST3K and Doctor Who.

Dravecky attended Georgia Tech. Afterwards he spent a dozen years working as a radio disc jockey – “moving town to town, up and down the dial” like in the WKRP theme song. He said of his experience:

I broadcast under my own name as well as the airnames ‘Scott Montgomery’ (my idea) and ‘Skip Church’ (not my idea). Yes, “Skip” had the Sunday morning shift before the syndicated countdown show. Surprisingly, the station received no complaints.

He finally settled in Dallas, where he helped develop music scheduling and broadcast automation software with several leading companies.

Dravecky also devoted considerable time to being an active Wikipedia editor. Over 100 articles he worked on were featured in “Did You Know?” or recognized as “Good” articles.

Dravecky originally was from Huntsville, Alabama and his brother says he will be interred there. A service will be held at Huntsville’s Holy Spirit Catholic Church, and there will be a separate memorial service for his friends in Texas in a few weeks.