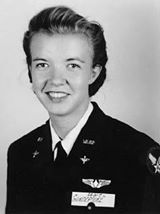 The passing of Eleanor Gunderson on September 27, 2013  became known in fannish circles this week.

She was a Women’s Air Force Service Pilot member during World War II. WASP aviators ferried aircraft from factories to the final destination. Gunderson joined from Iowa in 1944.

She was stationed at Minter Army Air Base in Bakersfield, where she flight tested PT-17, BT-13, AT-6 and UC-78 planes.

The 91-year-old’s friends included fanartist Selina Phanara who described her as “very much a fan.” She followed Babylon 5 and did some artwork, including a “picture of every type of vampire.”

Gunderson was an active spokeswomen for veteran women pilots, whose role had been slighted during and after the war. She cited this example to one interviewer —

“Anyone that was killed didn’t get any honors that males received,” said Mrs. Gunderson. “Their families where told, come get your daughter, she’s dead. If there wasn’t enough money to send the deceased home, the rest of the girls would pitch in. It wasn’t until last year when we received our medals, that the families of the women who were killed during and after training were given medals. For 30 years, we were written out of history completely, in any book in those days that told about World War II, there was no WASP.”

Gunderson spent the last two years of her life in Arizona.