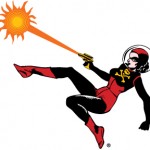 After 20 years as WisCon’s Tiptree auctioneer, Ellen Klages is passing the torch. She recalls how it all began in a nostalgic post on the convention’s blog:

In 1994, on the weekend of my 40th birthday, I was in Worcester, Massachusetts, for Readercon, the guest of my friend, Pat Murphy. Ursula LeGuin was the Guest of Honor, and Nicola Griffith was the winner of the Tiptree Award. I knew nothing much about all that, just that the prize was given by an organization that Pat had founded.

One of the committee members in charge of the evening’s banquet and awards ceremony told Pat that some generous people had donated a few items — t-shirts, a handful of books — to benefit the Award, and asked if Pat was willing to auction them off.

Pat was already emceeing the awards and interviewing Ursula, so she said, “No, but I bet my friend Ellen will do it.”

“Sure,” I said. What the heck? It sounded like fun.

And so it was that, at the end of a very long evening, I got up on stage in a hotel ballroom for an impromptu performance, convincing an audience to buy random objects for startling sums of money. Forty-five minutes later, the Tiptree coffers had a thousand dollars, and I was suddenly, accidentally, notorious.

A total stranger came up to me. “Where else in Worcester are you performing?”

It was a heady experience.

She also pays tribute to some of the people whose handling of the logistical chores has made it all possible.

Jeanne Gomoll — a national treasure — was, for a long time, the person accepting donations, setting up the display of items, and making sure the trains ran on time. Scott Custis hauled boxes down from their attic every year. Jim Hudson, a mensch if there ever was one, handled the accounting, a most important part of any fundraiser. In recent years, Nevenah Smith streamlined the process and added her own flair to the event.

Klages actually concedes she may participate in future Tiptree Auctions — but not as a solo act.