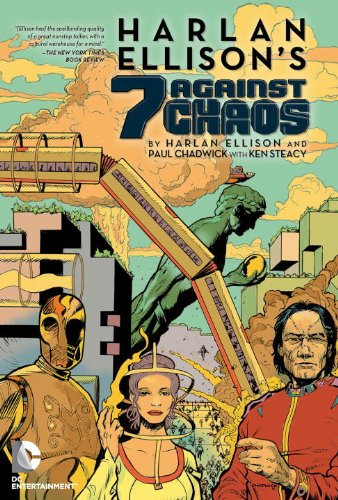 North Hollywood’s Blastoff Comics will celebrate its anniversary by hosting a signing of 7 Against Chaos with Harlan Ellison, Paul Chadwick and Kean Steacy.

It runs Saturday, January 18 from Noon to 3 p.m. at 5118 Lankershim Blvd. in the NoHo Arts District.

Describe for us HARLAN ELLISON, PAUL CHADWICK AND KEN STEACY…for the comic novice
Harlan Ellison has been called “one of the great living American short story writers” by the Washington Post; and the Los Angeles Times said, “It’s long past time for Harlan Ellison to be awarded the title: 20th Century Lewis Carroll.” Harlan is an essayist, screenwriter, and journalist; above all, Harlan is a writer. Harlan has written an original hardcover graphic novel titled 7 Against Chaos, with art by Paul Chadwick and Ken Steacy. We’ll have copies that can only be signed by all three creators within that 12-3pm window.

Paul is most famous for his groundbreaking comic book series Concrete and Ken, a talented writer and artist, had his artistic hand in many of the most important comic book stories of the 1970s and 80s.

Describe for us their novel 7 AGAINST CHAOS.
It’s “Seven Samurai” in space. What more can you ask from a graphic novel by three of our industry’s most famous luminaries?!