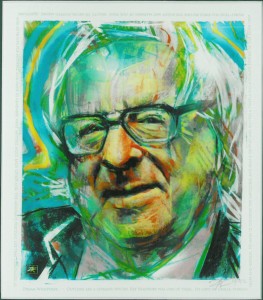 By Brandon Engel: When you listen to the news on the radio, do you ever wonder if what you’re hearing is authentic news, or merely some elaborate ploy? Maybe you hope, against all odds, that you’ve accidentally stumbled upon a broadcast of some dystopian, science-fiction radioplay, ala the infamous Orson Welles War of the Worlds broadcast.

Certain recent news items readily summon classic science fiction titles to anxious minds. Surely, there were genre enthusiasts who didn’t immediately think of George Orwell’s 1984 when it was revealed that the NSA had been spying on civilians. While the autocratic government in Orwell’s bleak vision of the future relied on “telescreens,” the United States government can rely, conveniently, on iPhones, computers, and other portable devices to gain invasive insight into our daily lives —our search queries, email exchanges, and even shopping histories.

Speaking of smart phones, the other recent news item which has set many people on edge is the news that Google recently acquired the home automation tech developer Nest. Home automation, for those who aren’t familiar, is a technology which many companies in the private sector have been developing in recent years. Companies in the private sector, like ADT, have been generating buzz at tech shows and conferences for their home automation systems which enable people to control many of their household appliances through a smart device app. While it might sound like a dream come true to some readers, bear in mind that, despite whatever short term conveniences this sort of technology might yield, users are made vulnerable to a whole world of potential abuses.

Google already possesses comprehensive data about virtually everyone, and they have gotten themselves in hot water in recent years for selling data to third parties. Imagine what could happen if Google were to acquire even more data about us —to think that your cellphone could conceivably offer anyone a direct window into your home…

The whole thing must feel uncannily familiar to fans of Ray Bradbury. One of the most memorable short stories from the author’s The Martian Chronicles is his story August 2026: There Will Come Soft Rains, which follows the story of a suburban house well into the future. Throughout the course of the story, the house carries out its daily duties: it prepares meals, cleans itself, and recites poetry. But, absent from the story are descriptions of human interactions. We don’t hear anyone say anything. No characters are introduced.

When we hear that a baseball has been permanently lodged into the side of the house, presumably as a consequence of phenomenal pressure, and that shadows of the house’s former occupants have been permanently burned into silhouettes on the exterior walls, it becomes clear that we’re observing the ultimate opulent application of technology, carrying on its duties and ultimately self-destructing after some sort of nuclear holocaust —the ultimate destructive application of technology. The story masterfully demonstrates what science fiction literature is good for.

Different fictions serve different purposes. Escapist fiction of the “sword and sorcery” or fantasy variety transports readers to alternate worlds, frequently inhabited by fictional races who speak fictional tongues. Horror fiction enables readers to confront their innermost demons and anxieties in a safe and controlled fashion. Science-fiction, in a way, sublimates the function of the two previously mentioned fictions; it commonly transports readers to another time, place, or dimension, (although the action of the story is almost uniformly a reaction to current, real-world events) and it typically features, at its basis, something pertaining to anxieties, specifically anxieties associated with technology.

Science fiction novels commonly offer speculative (and often paranoia inducing) visions of the future, where technology is used primarily to suppress humanity. Many of the most beloved science fiction novels and film scripts of all time where born out of the 1950s, during the most tense parts of the Cold War. The United States had shown the world that it not only possessed deadly nuclear capabilities, but that it wouldn’t shy away from using them if provoked. Certainly, one can see the artistic manifestations of this in their vehicles for popular fiction; films like Godzilla, which featured menacing, allegorical monsters devastating civilian communities, or television programs like Gigantor or Gundam, which show the preoccupation that the Japanese had with technology and warfare in the years after their defeat in World War II. Similarly, in the United States, many popular works of science fiction addressed issues of xenophobia and intolerance to foreign cultures or customs, for example the film The Day the Earth Stood Still.

There’s no disputing that technology has advanced our society by leaps and bounds, but at what potential costs? How do we harness the advantages of technology, while safeguarding ourselves against the potential risks that are presented? We’ve seen much science fiction anticipating the potential downfall of society due to the misapplication of technology, so let us hope that governments and scientists in the academic and private sectors do their part to help ensure that the technology is used chiefly for good.