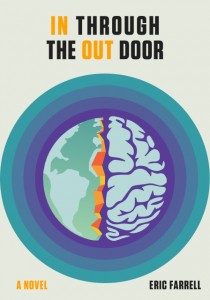 Introduction: Eric Farrell is the author of In Through the Out Door, an online serialized science fiction novel available at www.ericmatthewfarrell.com.

On a quiet street on the outskirts of Greenwich Village, Saul Selinger stumbles across a grandfather clock frozen in time. When he realizes it’s the same one buried deep within his sub conscience, it sets off a bizarre adventure that questions where he’s been, what he’s done, and the very state of the world he lives in.

Each week, readers can discover a new “episode” of Farrell’s novel and, he explains, “find themselves enthralled in a moody, graphic world where two men struggle with faith, peace of mind, and the will to live.”

Eric Farrell is a reporter by trade, having written for a variety of college, local and metro publications in the LA area, including the Orange County Register. In Through the Out Door is his first novel. Farrell posts regular updates on his Facebook page.

In this guest post, Farrell discusses the influences on his DIY book marketing from the music and pop art industries.

By Eric Farrell: Outside a quiet suburban 7-11 convenience store a young, aspiring rapper once approached me and shoved a hastily put together mixtape into my hands, telling me that yes, he would love it if I could donate some money to his cause, but more than anything else he was just grateful to have someone take a chance on his music.

For some reason, that single memory, years ago at this point, has stuck with me as a particularly aggressive, effective way of marketing. As an author, in a different entertainment medium entirely, it’s become increasingly apparent just how much more effective other disciplines of the arts are at marketing.

More importantly than the divide itself is the willingness for authors in a tenuous, shifting world of publishing and marketing to adapt to the changing marketplace and reader base. Let’s be real here: a lot less people get jazzed about reading than, say, movies, or television, or music, and as a result it’s a constant need to up sell your work – especially for authors that aren’t well established like myself.

For that reason, I’ve unwittingly been heavily influenced by the intense, visceral grassroots form of marketing that the young kid outside the 7-11 utilized that day. The independent music scene can teach the world of DIY literature a lot about adversity, persistence and the prudent need to stand out. Here in LA, dating all the way back to the eighties with the rise of hair metal and still lingering about today, it’s not uncommon to see a barrage of intrusive flyers featuring an artist’s name in bold typeface plastered about the entire city. Is it hamfisted? Yes. Is it effective? I genuinely believe so.

It’s not just the marketing that the writing world can take some tips on, though. Dare I say it, television and film does dialogue – does writing in general – better than we do a lot of the time. Where dense fiction falls prey to stiff, forced dialogue, a weekly hour-long drama can yield dialogue so utterly evocative and organic it draws you in and keeps you hooked. There is something about the timing and structure of a television show, or a movie, that benefits writing in a concise and expressive way. A line of script is written with the intention of its specific intonations being directed to an actor. A page of script is written with the intention of it seeming real when put on the screen.

What I’m getting at, ultimately, is accessibility. The quick-witted, pragmatic dialogue of television and film is easily digestible and creates a pace that’s more palatable to modern tastes than the often methodical, occasionally archaic style of literature. I’m not going to say we have to cater to a different group of people entirely, because first off that term is pejorative and alienating but second because it’s not a different group of people, it’s a changed group of potential readers. Viewers don’t even watch television in the same way that they used to: instead of barging through the door to watch the latest episode of Breaking Bad, they DVR it and watch it on their own time. Or they’ll catch it on Netflix in the future. These aren’t a different group of television viewers – it’s the same people, they’ve just grasped at the new media in front of them.

In the reading world, it’s the same: people don’t read actual newspapers, they get quick, one sentence push updates on their phones. Instead of sitting cross-legged in the aisle of a bookstore, browsing the jacket summaries of a stack of novels, people kick back on their sofas and browse through their phones for the same information, or scan their tablets. Since these gadgets essentially allow consumers to read, watch, and listen all on the same device, there is already an inescapable assimilation between the different disciplines of entertainment. On my money, people aren’t going to take to dense speculative fiction after immediately watching an episode of the hottest current television drama.

That dialogue people love to soak up in movies and television really works effectively in novels as well: it’s not hard to digest yet it’s never insulting any intelligence, plus since it’s so organic it adds a whole new level of immersion into the story. It can be utilized in dialogue and description itself, painting a picture eloquently and concisely that instantly arouses without the need to dig for the beauty to begin with.

There is no need to lament this progression of taste. If we did, we would all write like Mary Shelley, and praise be, it would be upon a scourge to the dregs of society, but alas it is not an appeasing endeavor such as the opening of the skies to the heavens and by degrees an ineffectual relationship with the manufacture of currency, and thus we find it pertinent to crawl back into our respective hovels to refigure our creations.

Literature has lost its sense of savvy and, compared to the other entertainment media, has held strong as the most aloof of the bunch when it’s come to adapting to the changing marketplace and readership. Like anything, this world has its hardcore fans who sniff at the pages of used books like fiends, shuddering at thoughts of ebooks. They’ll always be loved and treasured by authors like myself for their element of loyal enthusiasm that sustains morale. Are they enough, though?