Craig Miller was invited to speak at the Animayo Animation & VFX Festival on the island of Gran Canaria in the Canary Islands earlier this month on the subject of Star Wars. Craig worked for Lucasfilm in the 1970s as Director of Fan Relations and started the Official Star Wars Fan Club.

When he got back Craig repeated several anecdotes from his talk for Facebook friends.

One of the things I was prompted to mention during my talk was that, if, during the years I was at Lucasfilm, someone wrote to us asking for an autographed photo of James Earl Jones or David Prowse, the letter went to the actors (or their reps). If they asked for Darth Vader’s autograph, the photo came to me and *I* signed Darth Vader’s name on the photos. So, of course, some of the people who came up for an autograph, asked me to sign both my name and Darth’s. It took me a few moments to remember what “Darth’s” signature looked like but after I did, I’d sign that, too.

That struck me as funny, and it also set me to thinking about people who collect the signatures of famous fictional villains rather than the actors who play them.

Well, of course they do. Didn’t my daughter collect all the autographs of the Disney princesses? Same thing. Except evil, of course.

Naturally, Google has a lot of examples of Darth Vader photos autographed by Jones, who performed Darth’s lines, and Prowse, who did the physical acting.

There are also a bunch of websites with unrelated Vader autographs, many obtained by people in their childhood from random actors making “personal appearances” in costume at shopping malls.

Next I wondered, does somebody sign for Sauron, too?

The actor who played Sauron (while he still had a body) in head-to-toe armor in the first Lord of the Rings movie by Peter Jackson, Sala Baker, has signed his share of trading cards. 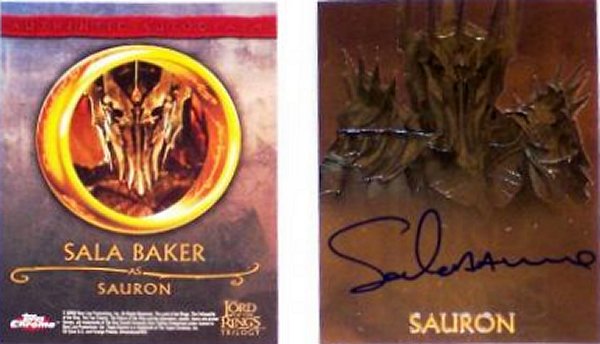 And now I like to think that fans who write directly to Sauron at the studio (and not to the actor) have their requests filled by Craig Miller’s counterpart, who has practiced signing the Dark Lord’s name with a flourish.